Two Ilkeston men were among the ill-fated crew of HMS Hood…. 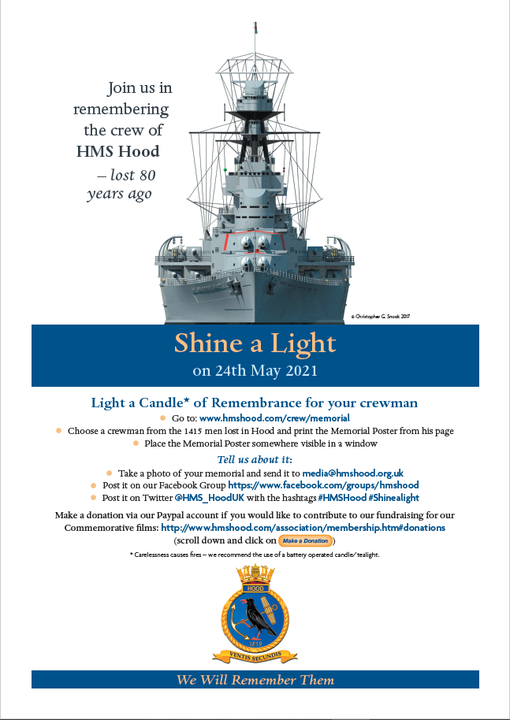 Two Ilkeston men were among the ill-fated crew of HMS Hood.

On 24th May 1941, in the battle of the Denmark Strait, a shell from the German battleship Bismarck put an end to HMS Hood, then the world’s biggest and most famous warship, and ended the lives of 1,415 of her men. Just three sailors survived. The organisation formed in memory of the famous British battlecruiser, the HMS Hood Association, is preparing to mark the 80th anniversary of her loss, with a ‘Shine a Light’ initiative to commemorate her crew.

Veterans and families connected with Hood founded the HMS Hood Association in 1975 – and that Association, now worldwide and nearly 500 strong, still thrives today. In normal times the Association would gather from the four corners of the world to the Royal Maritime Club in Portsmouth to raise a glass to the men of Hood and to hold a commemoration. However in a Covid world that is not possible, so the Association is asking its members, friends and associates to help ‘Shine a Light’ for Hood’s lost crew.

The HMS Hood Association has commissioned a film to mark the 80th anniversary. Entitled ‘HMS Hood – Mighty Then, Mighty Now’, it is being produced through the generous work of maritimefilmsuk.tv and with the cooperation of the Royal Navy’s HMS Tamar. The film will be available freely via the Association’s website and on YouTube, from around the anniversary date, 24th May.

To that wartime generation Hood had spent the previous 20 years flying the White Ensign for Britain. She led the famous ‘Empire Cruise’ circumnavigation of 1923-24, in part to show off Britain’s naval prowess to the world, but also as a thank you and tribute to the Dominions who had helped Britain so much during the Great War. She was the public face of the Royal Navy. Her image was used everywhere to show that the Britain which then had the largest Navy in the world was unchallengeable on the High Seas, and in Hood the Navy, and the Nation had the perfect image.

Hood was the largest warship ever to fly the White Ensign until the current aircraft carriers HMS Queen Elizabeth and HMS Prince of Wales were commissioned; her nickname around the world was the Mighty Hood and it was expected that she would live up to her name. So it was with stupendous shock that the nation heard of her loss at the Battle of the Denmark Strait, not just for the families who would grieve for loved ones, but for the Royal Navy, the nation, and Britain’s Empire.

In common with many towns and cities up and down the country Ilkeston was touched by the loss of Hood with two of the town’s sons being lost in Hood that sad say. Their names are recorded on the ship’s Roll of Honour: Gerald Alwyn Aldred and Frank Donald Sullivan. The Association has been collecting pictures of the crew for their memorial pages, to date the Roll still lacks the photographs of around 400 men, and the Association would love to hear from anyone who can provide a photograph of either of these men.

Read more about the HMS Hood Association and Hood’s men on www.hmshood.org.uk