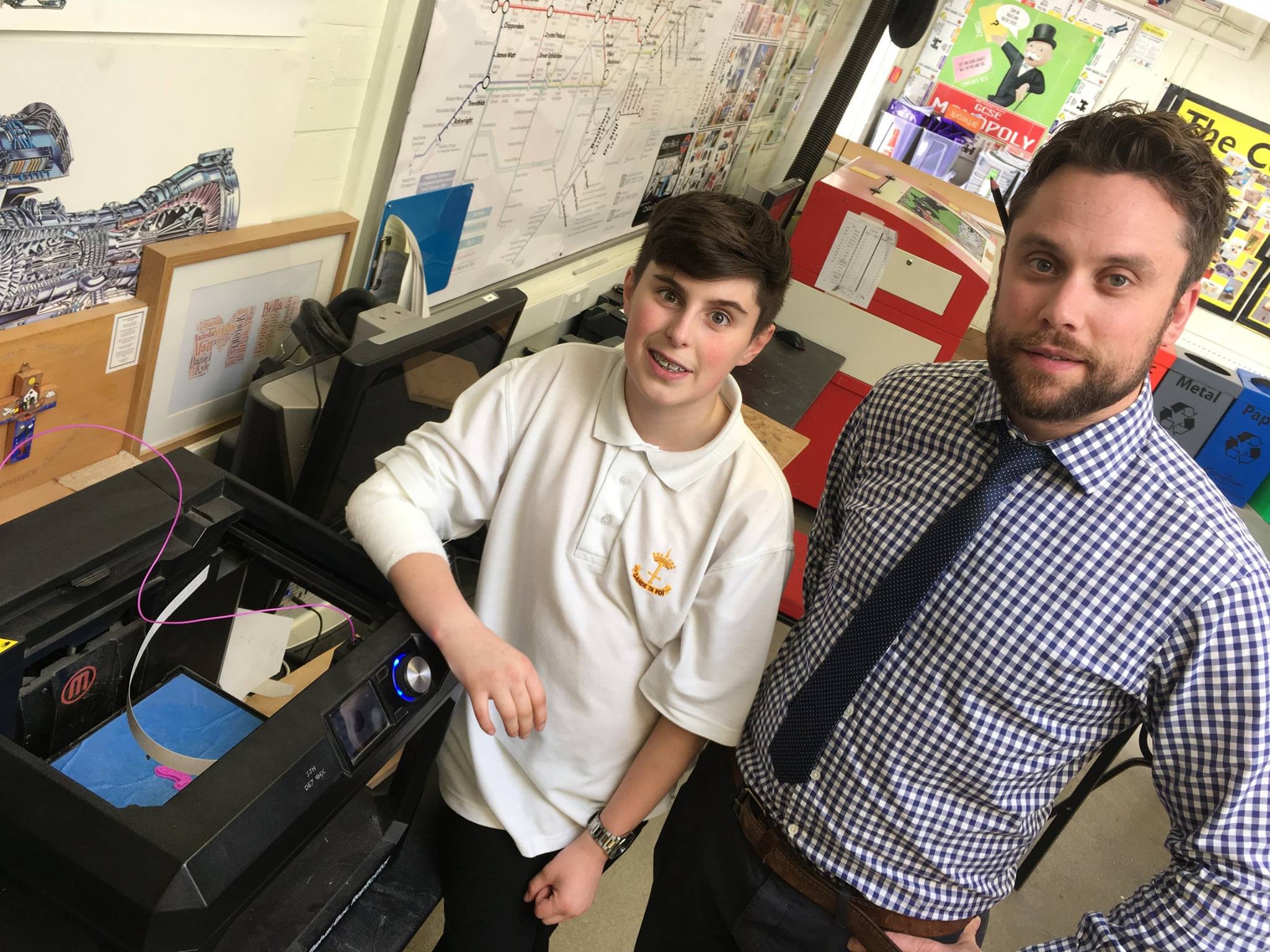 A teacher used a 3D printer to bring to life an idea which will help a pupil regain his independence after he suffered life-changing injuries in a freak bicycle accident.

James Wheldon, Design Technology teacher at Saint John Houghton CVA, in Kirk Hallam, created a plastic finger for pupil Oliver Smith, who has lost the use of his right hand following the crash.

The finger attaches to a splint that the teenager has to wear for the next 18 months and it means he can now type with two hands and should be able to complete his GCSEs.

Oliver severed a main artery and two nerves in his arm and lost five pints of blood after he put his hand through a glass window when he crashed a bike he was riding in the back yard of his Ilkeston home just over six weeks ago.

He was told by doctors that he could have died and was twice warned that he could lose his arm before two lengthy operations to reconstruct it.

The 15-year-old may only ever regain 40 to 70 per cent of the feeling in his right hand after two years when the nerves have re-grown.

Oliver said he was extremely grateful to Mr Wheldon for coming up with the idea to create a plastic finger using the school’s 3D printer.

He said: “We were just talking about what we were going to do about my GCSE coursework and Mr Wheldon said he had an idea. He said he could design a finger and use the 3D printer in school to make it.

“He drilled a hole into the end of my splint and it fits in there; it’s pretty amazing. He’s made three fingers all at different angles.

“It’s made life much easier although it’s taken a while to get used to. I’m really grateful to him; he’s gone above and beyond what I’d expect a teacher to do. My Product Design GCSE is 60 per cent coursework and I can type now so hopefully I’ll be able to complete it.”

Mr Wheldon said he was pleased to have been able to help Oliver.

He said: “I was thinking about how he was going to do his GCSEs and how I could solve that problem for him. I thought I could use the printer to make him a finger that could attach to the end of his splint. It only took about 15 minutes to design and print it out. We’ve made a few prototypes and we are still finalising the design. I think it’s been a big help. We’ve still got to work out how he will do the practical part of his GCSE but hopefully having the finger, which we call Claw 5, will have a big impact. He’s such a resilient young man.”

The accident in which Oliver was injured happened after he had tried to fix the brakes on a friend’s bike and was testing them out when they failed.

He careered down a ramp towards the back of his house and in order to break his fall he put his arms out but his right hand went through a single glazed pantry window which was several feet up.

The teenager was left dangling from the window with his arm trapped by broken glass digging into his armpit, so he pulled it out and dropped to the floor, causing his arm to tear apart to just past his elbow.

His parents Lucy and Tim, who saw the crash unfold from the kitchen window, rushed to help him, binding his arm with tea towels and bundling him into their van to take him to Ilkeston Hospital.

When he arrived, doctors and nurses applied a tourniquet and he was taken by ambulance to Queen’s Medical Centre in Nottingham, where he underwent a seven-hour operation to reconstruct his arm and was told it might have to be amputated.

Doctors managed to save his arm but the next day he suffered a blood clot in it and had to undergo another five-hour operation and doctors warned him again that he may lose it.

Thankfully he came through the surgery with his arm intact and has since had a skin graft to help with the healing process.

Oliver said that immediately after the accident he thought he was going to die.

He said: “I was heading towards the back of the house on my bike and I just shut my eyes and put my arms out. My right hand went straight through the pantry window but I didn’t feel it because my nerve had been cut. I just pulled my arm out but doing that tore my arm apart.

“My first thought was that I was going to die. I held my arm up and the skin just flapped down and I could feel it hit my shirt and my bicep, which was purple, was just hanging out.

“I screamed and my mum and dad came running. They grabbed tea towels and tied them around my arm to apply pressure.

“I remember going over the speed bumps in Church Street in Ilkeston and thinking how I’d totally destroyed my dad’s van with all of the blood. We went to Ilkeston Hospital which is really close and the doctors said if we’d decided to go to Queen’s Medical Centre in Nottingham instead I could have died because of all the blood I lost.

“When we got to Ilkeston I couldn’t stand up, I was leaning against my mum and she asked for help. They put a tourniquet on my arm and then I went to QMC in an ambulance.

“I was going in and out of consciousness and then I passed out but when we got to the QMC I remember about 12 or 13 doctors and nurses all asking me lots of questions, trying to keep me awake.

“Before both of my operations they told me that it was very likely that I would lose my arm and when I came out of the second surgery and looked down I saw that my arm was still there so that was an instant relief. I was in intensive care and stayed in hospital for four days after that. I came home with a big cast on and now I wear a splint. I’ve been told that it could take up to two years before I regain the feeling in my right hand, because the nerves have to re-grow, and it will only ever be between 40 and 70 per cent.”

Oliver’s mum Lucy is a pharmacy technician and has attended first aid training courses which she said helped her to deal with the aftermath of the crash.

She said: “I think any sort of first aid training makes a difference. There was blood everywhere, the back yard was a river.

“I remember when we went into the hospital Oliver said he needed some help because he had cut his arm when I was literally holding it together.

“At one point he asked if he was a disappointment to me because he was due to go on a World Challenge trip to Nepal with school and he thought he might not be able to go.”

Oliver will be going on the Nepal trip, which Mr Wheldon is leading, in July and he is regularly attending hospital for check-ups.

Oliver’s mum Lucy said she was extremely grateful to Mr Wheldon for his support.

She said: “I think the finger is fantastic and it’s given Oliver more independence as he will have to learn to do everything with his left hand now. Mr Wheldon has been brilliant; he’s been so supportive of Oliver and really taken him under his wing.”