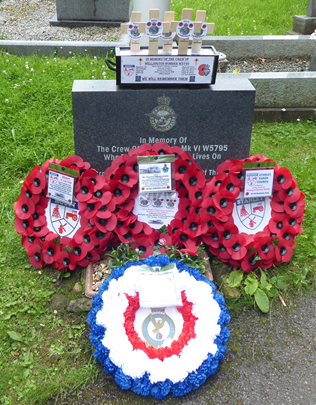 The crew of the ill-fated war plane that came down in a local field are remembered again.

Terry Hall:
Sadly, like so much due to Covid, the Annual W5795 Memorial Service was cancelled.
As MOSVT Trustee, I held a short distanced poignant Memorial at the Stanley Bomber War Memorial in St Andrews Churchyard.
It was attended by Mr & Mrs Adrian and Hilary Eddleston, representing all the families of the crashed plane crew and laying a W5795 Wreath on behalf of all relatives.
Other wreaths laid were the Stanley Parish Council Wreath representing the Parish, an RAF Erewash Branch Wreath and finally an MOSVT Wreath representing all those ex Service people and villagers who would normally attend this Service.
The RAF Flag was half-masted and an individual named poppy cross placed for each crew member lost.
The RAF Flag was left at Half Mast, as immediately after our 11am wreath laying a local funeral was to be undertaken. The weather was very kind to us despite the forecast, and shortly afterwards Hilary and Adrian set off back home to Lincolnshire.
After the Service, and due to consideration of the churchyard grass cutters, the families wreath was secured on the memorial, and the S&SCPC, MOSVT and RAFA wreaths were secured to the Stanley War Memorial just outside the Stanley St Andrews Church.
The Service next year will be held on Saturday 2nd July 2022 with the W5795 Service at 11am, followed by the Stanley Gala Procession at 12.30pm and Grand Gala.
A Battle of Britain Flyover request has been submitted as per the cancelled event in 2020, and 2022. It will be the 80th Anniversary of the Loss of W5795. We Will Remember Them.