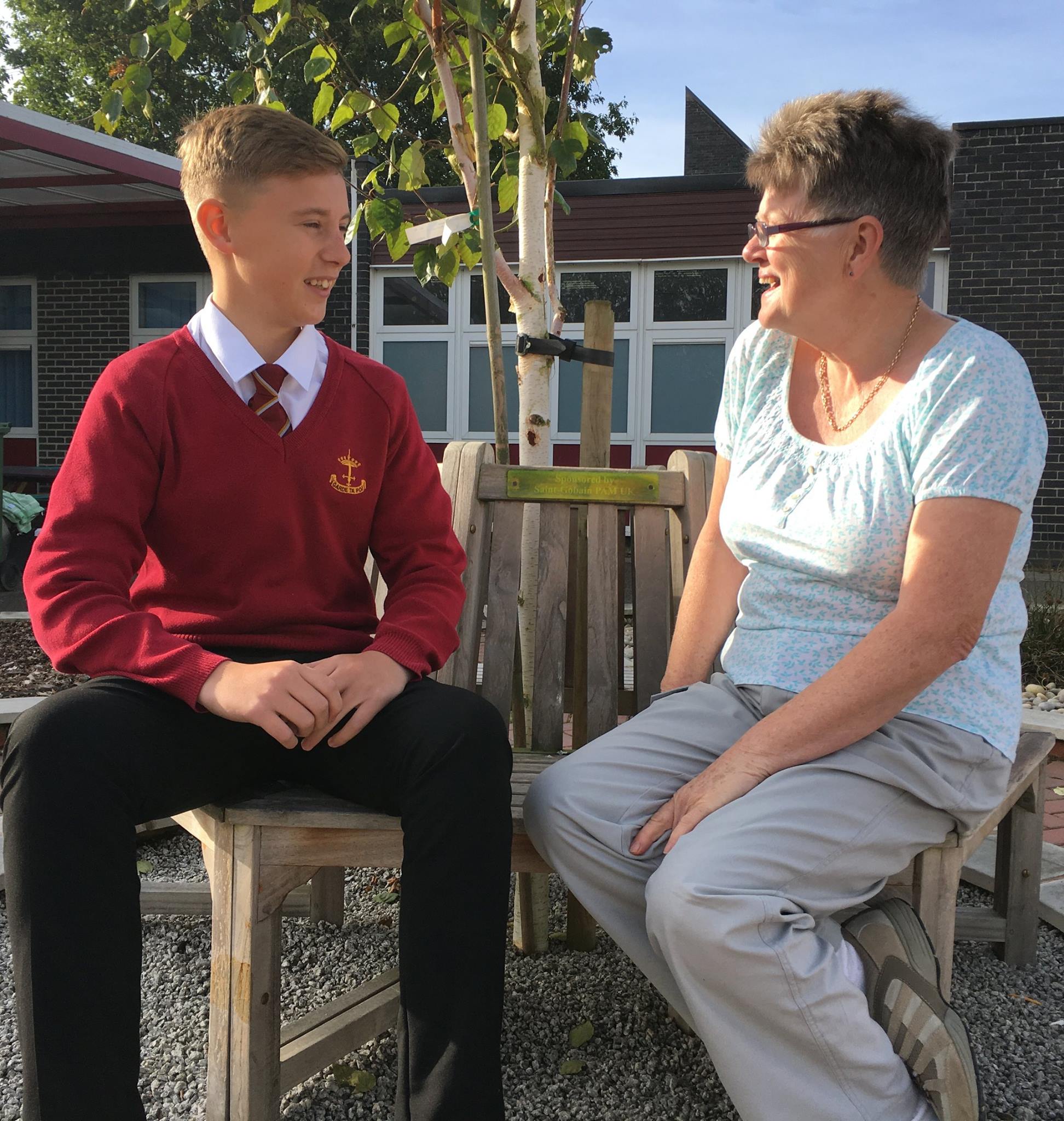 A pensioner has thanked a Saint John Houghton Catholic Voluntary Academy student who came to her rescue after a serious fall which left her needing hospital treatment.

Carol Kirkman, 65, tripped and fell forward on to her face as she was walking up steps to her daughter’s house in Ilkeston.

She suffered a nasty cut to her head and knee and bruising but was saved from suffering more severe injuries by her titanium glasses which took the brunt of the fall.

As she lay on the floor, 15-year-old James Kells, who was walking home from Saint John Houghton CVA, came to her aid and helped her up.

Mrs Kirkman, of Waingroves, said: “I was rushing to see my grandsons at my daughter’s house because I was due to go away the next day and I just missed the first step up to her front door and fell very heavily. I was lucky really because the glasses I was wearing are made of titanium and are indestructible and they took the brunt of the fall.

“I hadn’t seen anyone behind me but I heard somebody asking if they could help me as I was trying to crawl up the steps. I now know it was James and he helped me up and when my daughter came to the door he asked if I was going to be alright. It all happened in a flash.”

Mrs Kirkman’s daughter took her to the Royal Derby Hospital where she had a brain scan as she was suffering from double vision. Her cornea was also scratched but doctors said she was fine to go home and asked her to schedule an appointment with her optician.

Since the accident, which happened on Friday, September 23rd at 6.15pm, Mrs Kirkham managed to track James down to Saint John Houghton Catholic Voluntary Academy in Kirk Hallam.

She visited the academy to thank him for his help and gave him an Amazon voucher.

She said: “I just wanted to acknowledge what he did for me really as young people often get a bad press and I’m grateful to him for stopping and helping.”

James, of Ilkeston, said he was glad that he could help.

He said: “I was walking home from school and Mrs Kirkman was in front of me. I heard her fall and I could hear groaning. I walked over to her and made sure she got up. My granddad died from a fall so I know how serious they can be. I’m just glad she’s ok.”

Joan McCarthy, head teacher at Saint John Houghton CVA, praised James.
She said: “We are pleased that Mrs Kirkman has recovered and we wish her well. We are also extremely proud of James for stopping and helping in the aftermath of what must have been a traumatic incident.

“Encouraging our students to show kindness to others is so important to us and James’s actions are a great example of this.”