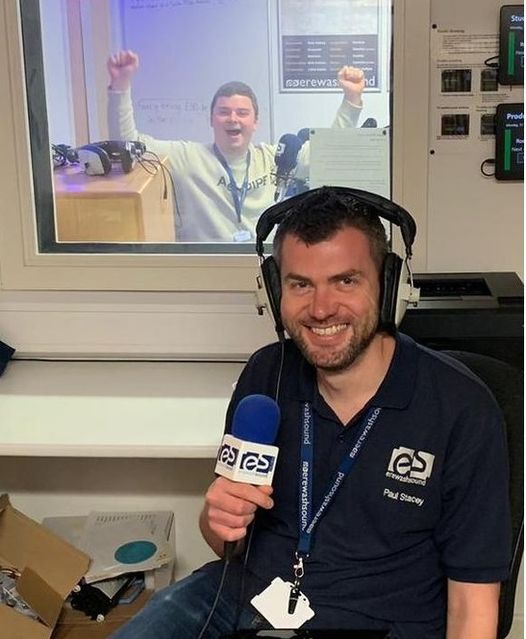 Erewash Sound Breakfast Show host Paul Stacey found himself locked out of his studio last month.
He arrived at the media centre in Cotmanhay to present the show as he has done for the past decade, but found colleague Lewis Allsopp had taken his place at the microphone.
Fellow presenters had decided they weren’t going to celebrate Paul’s ten-year anniversary with a cake and a card – but send him out on a series of outside broadcasts.
Lazy Sunday presenter Ian Perry takes up the story.
After months of secrecy and strategic planning involving some of his colleagues, his family and probably some friends in on the ruse too, Paul was soon bundled out of the door at 7am on Monday 31st October along with some outside broadcast kit, to embark on a treasure hunt with clues designed for listeners to help him find his way around the borough and to his final destination at The Draycott Tap on Friday morning for an end-of-week party!
From an initial meeting with his parents and a flask of hot coffee in Dale Abbey on Monday morning, his route took him through the week to Broomfield Hall College in Morley to do some gardening, the Wonky Teapot cafe in Long Eaton to ice some cakes, to Sandiacre Town FC for a rigorous training session, Curves Gym in Ilkeston for a full work out, to Hooks Farm in Borrowash to meet the animals and get recruited as a farm hand. Finally, he was put through the machines – not literally – to manufacture some mince pies at speed at Stacey’s Bakery in Ilkeston.
On Friday morning (4th November), the show came LIVE from micro pub and brewery – The Draycott Tap House where he met the Mayor of Erewash, Cllr John Sewell along with the Mayoress, his wife Rose, and enjoyed a live ‘Windy Pops’ performance from Long Eaton Silver Prize Band led by Sharon Stansfield with their version of ‘Supertrouper’ by ABBA.
He also received an engraved pint pot to mark his 10th anniversary on the Erewash Sound Breakfast Show into which a commemorative beer was then poured. Greg Maskalick from The Draycott Tap House, had commissioned a special beer available for a limited time called ‘Windy Hops’ – a homage to Paul’s regular Friday morning feature called ‘Windy Pops’ in which he plays a version of a pop song recorded by a brass band – designed to put a smile on the listener’s face.
After the Friday treat, and the emotions of the week, a grateful Paul said: “I’m still beaming! Overjoyed at such a ridiculous, incredible surprise for me (and, today, anyone in Draycott who wasn’t awake!). Thank you so much!”