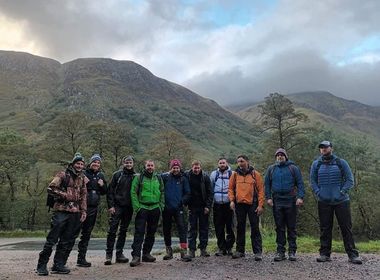 TEAM MAZ COMPLETE THE THREE PEAKS CHALLENGE
Kirk Hallam friends of Paul Marriott (also known as Maz) have climbed the highest mountains in Scotland, England and Wales to perpetuate his memory and raise money for two charities.
Daniel Beadsmoore, Richard Dygutowicz, Danny Eyre, David Lenton, Matt Lenton, Matthew Knighton, Ian Powell, Matthew Slysz, Joe Gussow, Scott Flinders and Samuel Hutchinson all decided to climb the Three Peaks to celebrate Maz’s life after he died suddenly of a heart attack, aged just 40 on 17th June this year.
They set out for the climbs at 6am on Friday 30th September after a breakfast at the Cat and Fiddle Inn.
Despite sometimes awful weather conditions, they reached the summits of Ben Nevis, Scafell Pike and Snowdon in approximately 28 hours, raising £6,000.
The money has bought two defibrillators and a memorial plaque, and the remainder will be shared by British Heart Foundation and Macmillan Cancer Support.
Maz’s family have praised the Kirk Hallam community for their support and making the challenge happen.
More in Friday’s paper.