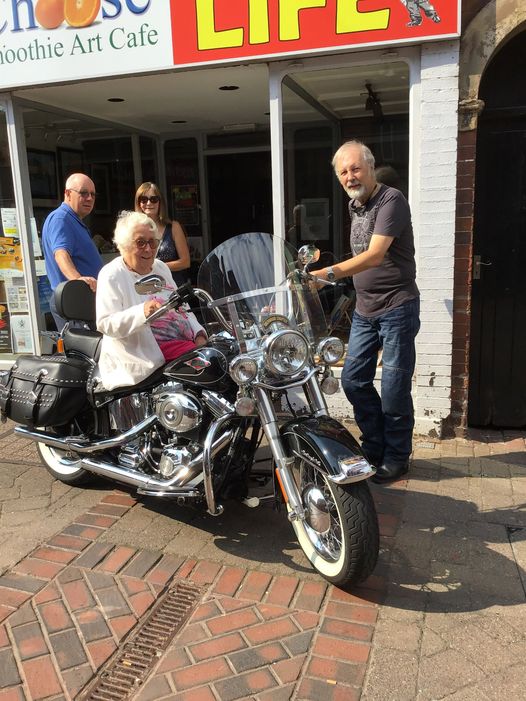 Motorbike fan Nora Waite has realised her dream of sitting on a Harley-Davidson.
Nora, 91, is a regular in the U Choose Smoothie Bar on Bath Street, and while talking to another customer one day about her secret longing, she was overheard by café owner and Ilkeston Life editor-in-chief Paul Opiah.
As she was leaving, Paul whispered in her ear: “I have a friend with a Harley-Davidson, I might be able to make your dream come true.”
Fast forward a little while, and a Harley Davidson arrives outside the café and Nora gets her wish.
A delighted Nora remembered: “Holidaying at Mablethorpe one year, a cousin from Nottingham came to visit us on his motorbike. We were camping in Whitehead’s field on Golf Road, having a lovely time. By the way, it was just before the 2nd World War started, so I would be seven or eight years old.
“I was allowed to sit behind my sister, Hilda and my cousin Gordon on his motorbike to have a photo taken – I didn’t get to have a ride!
“Since then, I have always had an interest in motorbikes, especially Harley-Davidsons.
“And now I’ve been able to get on board one again – such a long time after my first experience!
“Thank you Paul and Tad [the owner of the bike] for making it happen.”