Derby County FA Cup winner to be commemorated with plinth… 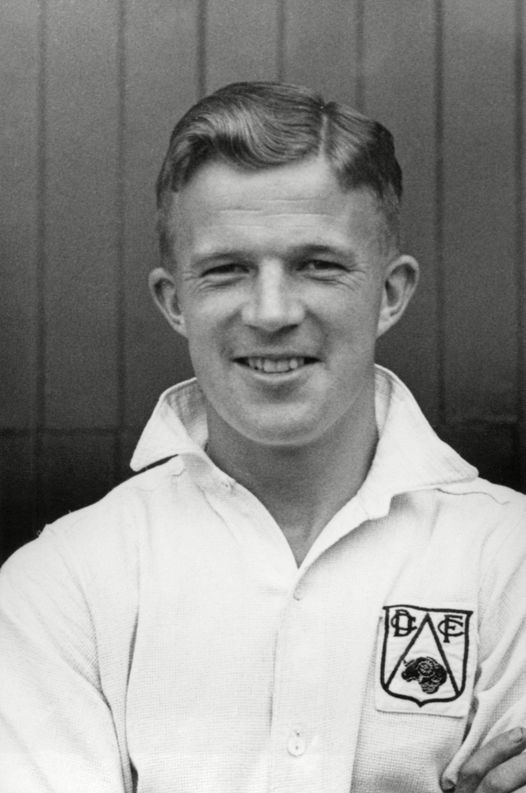 Derby County FA Cup winner to be commemorated with plinth

Bricklayers from Hodgkinson Builders are building a plinth at Pride Park Stadium to commemorate former Derby County winger Reg Harrison.
A £10,000 bronze bust of Mr Harrison, by celebrated sculptor Andy Edwards, will top the five-feet tall brick pillar when it is installed on Thursday (August 11) in Derby County’s main reception.
Before his death in 2020, aged 97, right winger Reg Harrison was the last surviving member of Derby County’s 1946 FA Cup-winning team, which also included the likes of the legendary Jackie Stamps.
As an even more fitting tribute, the plinth will be built using bricks from the club’s old stadium, the Baseball Ground, which the Derby building firm’s managing director Ian Hodgkinson reclaimed when it was demolished almost 20 years ago.
Ian, from Ilkeston, who describes himself as a “massive Derby fan”, will oversee the work of his bricklaying apprentices alongside his site foreman Jack Smith, also a big fan of the club.
A short building ceremony will be held at 3pm on Thursday, August 11, once the bust is in place.
Ian, whose company received huge praise from TV viewers after appearing on the first series of Brickies earlier this year, said: “This may not be the biggest job our apprentices have attempted, but it’s one that will hold a very special place in the hearts of Derby County fans for many years to come.
“As a massive Derby fan myself, I’m incredibly proud to be involved in something that commemorates the life of one of the club’s greatest heroes.
“Fortunately, I still had just enough Baseball Ground bricks left to complete this very important project. I’m so glad I kept hold of them.”
Ian’s company has a long and involved relationship with Derby County. His staff also built the plinth for the Steve Bloomer bust, which takes pride of place next to the home team dug-out, as well as constructing Pride Park stadium’s Lionel Pickering entrance.
Perhaps most impressively, Hodgkinson Builders also built the base for the stadium’s iconic Brian Clough and Peter Taylor statue – also created by sculptor Andy Edwards – almost 12 years ago.
“That one took about six weeks to complete,” said Ian. “It was quite a big job. Luckily, the Reg Harrison pillar will be done in less than a day!”
Cash to pay for the Reg Harrison memorial was raised through a crowdfunding initiative by the Rams Memorial Trust, launched after the player’s death nearly two years ago.
The bust was originally set to be installed at the entrance to Field Lane FC, in Alvaston, Derby, one of the clubs founded by Mr Harrison in 1982. But fears about the security of the expensive sculpture led to a rethink.
The scenes on August 11th will be filmed by BBC documentary makers as they capture the final frames of the second series of Brickies, due to be aired in spring next year.
For more information about Hodgkinson Builders, or to check available job opportunities, visit www.hodgkinsonbuilders.com.