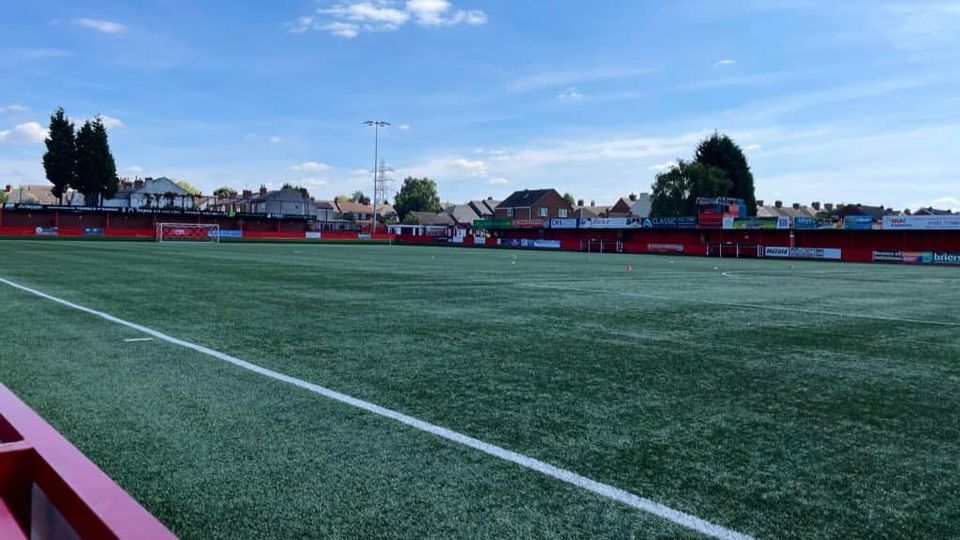 Tamworth v Ilkeston updates will appear here from 3pm. It’s Ilkeston’s first match of the season having been promoted to the Southern Premier League Central.
There seems to be some needle already. On social media travelling Ilkeston fans are being urged to boycott sales in the ground because of Tamworth’s non-cooperation with the club over ticket sales (there are no cash turnstiles) and other matters.
Ilkeston fans will be segregated.
Pictured: The Lamb Ground, Tamworth. Team has arrived.
How they line up:
Tamworth:
1 Singh, 2 Corley, 3 Fairlamb, 4 Mussa, 5 Dolman, 6 Collard, 7Finn, 8 Milnes, 9 Creaney,10 Bradley, 11 McKeown.
Bench: 12 Deacon, 14 Hurst, 15 Cockerill-Mollett, 16 Cater, 17 Jones.
Ilkeston:
1 Deeney, 2 Bird, 3 Wakefield, 4 Thomas K, 5 Brown-Hill, 6 Fenton, 7 Troke, 8 Bradley, 9 O’Grady, 10 Gibson, 11 Thomas J.
Bench : 12 Campbell, 14 Goodson, 15 Hilton, 16 Ward, 17 Bukowski.
It’s a warm and sunny afternoon, and away we go. The new season is underway.
First shot of the game is from the boot of Montel Gibson – wide.
Ilkeston are forcing Tamworth back in the early stages.
Chance for Tamworth when they get a free kick – it’s blocked, then Deeney makes a good save.
Tamworth are having more the ball now – it’s fairly even. Promising move by Ilkeston ends when Bird is robbed as he’s about to shoot.
Chances for both teams. Gibson volley clears the the bar and a good run by Creaney is dealt with by the Ilkeston defence. Deeney grabs the ball well under pressure. No goals as we reach the half-hour mark.
Goodson comes on for the injured Bradley.
It’s half-time. Nil-nil.

It’s also 0-0 at Charlton where Derby have dominated but failed to score. They’ve had 62% possession, 7 corners and 8 shots including 2 post hits. But Charlton almost took the lead just before half time in a rare attack.
Nottingham Forest have been under the cosh at Newcastle, the Toons having had 14 shots to Forest’s 3 but it’s 0-0 at the interval.
Notts County lead Maidenhead 2-0 at the break, Langstaff scoring both goals on 22 and 44 minutes.

We’re underway again at The Lamb.
Tamworth go close to scoring a quick goal but the ball ends up in the side netting. O’Grady makes a chance for Goodson whose shot is blocked. Then another chance for Tamworth but thankfully an Ilkeston defender takes a hit. Lively opening!

Both teams having good spells. Both have had shots in the side netting.
A chance falls to Ilkeston’s Ollie Brown-Hill – the keeper saves well.
Jack Thomas goes in the referee’s book for some reason.
Jamie Ward replaces O’Grady on 65 minutes. Can the former Derby and Forest forward make a difference for Ilkeston?
Sorry, we are having some internet problems. Some posts have disappeared.
Not long left.
Ilkeston get a free kick after Ollie Brown-Hill is brought down. Ward
shot is deflected.
Goal for Ilkeston: Kalern Thomas, 86 mins.
Goal for Tamworth: Ty Deacon, 89 mins.
Full time: Tamworth 1 Ilkeston 1.
Ilkeston were not happy with Tamworth’s equaliser. Apparently goalkeeper Deeney was ‘clearly fouled’. However, Ilkeston’s goal was against the run of play.