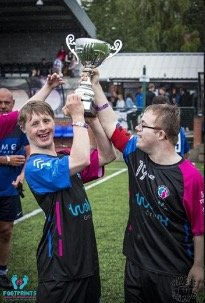 On Saturday 18 June, the Nottinghamshire Down Syndrome community along with TV Stars, a Paralympic athlete and former professional footballers will come together to help break a Guinness World Record for Odd Socks and take part in the 5th annual Footprints Cup charity football match.

Before kick-off everyone is invited to join in a Guinness Book of Records World Record attempt for the largest amount of people wearing odd socks in one place. This is in support of Down Syndrome awareness and the extra chromosome, which has been compared to an extra sock. Following the potential record breaking gathering, two celebrity teams will go toe to toe in a footballing friendly from 2.45pm.

Established in 2018 the event is organised by Paul Brooks, who rallies stars of stage, screen and sport to take part in the annual charity football match to raise money for Nottingham based charity Footprints Conductive Education Centre. The centre, based in Sneinton, helps babies and pre-school children affected by Down Syndrome and conditions such as cerebral palsy that cause motor disorders or motor development delay, to reach their full potential in a safe, fun and supportive environment.

“It’s a great family day out, but primarily its an opportunity to raise awareness about conductive education, the services provided by Footprints and the positive impact their work has on the lives of children with motor learning difficulties, motor delay and Down Syndrome and their families.”

Footprints is a welcome support for parents, offering practical guidance, information and emotional support, helping them to gain confidence and the strength needed to cope with their child’s disability.

Footprints Manager, Andrea Kelly, comments: “The Footprints Cup is a fantastic family day out and makes so much different to Footprints. The funds raised on the day make a huge positive impact on our ability to help families in Nottingham and the East Midlands. We’re excited about this year’s activities and would encourage as many people as possible to come along and support where they can.”

Paul concludes: “There will be a range of attractions alongside the world record attempt and football match which will ensure that everyone is well entertained and hopefully part of an Odds Socks World Record. It promises to be a great fun afternoon for the whole family, while supporting a very worthy cause, so we want as many people as possible to come along and support us.”

Gates open at Ilkeston Town FC from 10am with kick off at 3pm. Adult tickets prices at £5, under 16 years old are only £1 and children under 10 are free. For more information on players, prizes and tickets can be found on the Footprints Cup 2022 Facebook page: https://www.facebook.com/teamfootprintsfc.