Ilkeston v Shepshed Dynamo. This is it. By 5pm we could be league champions an… 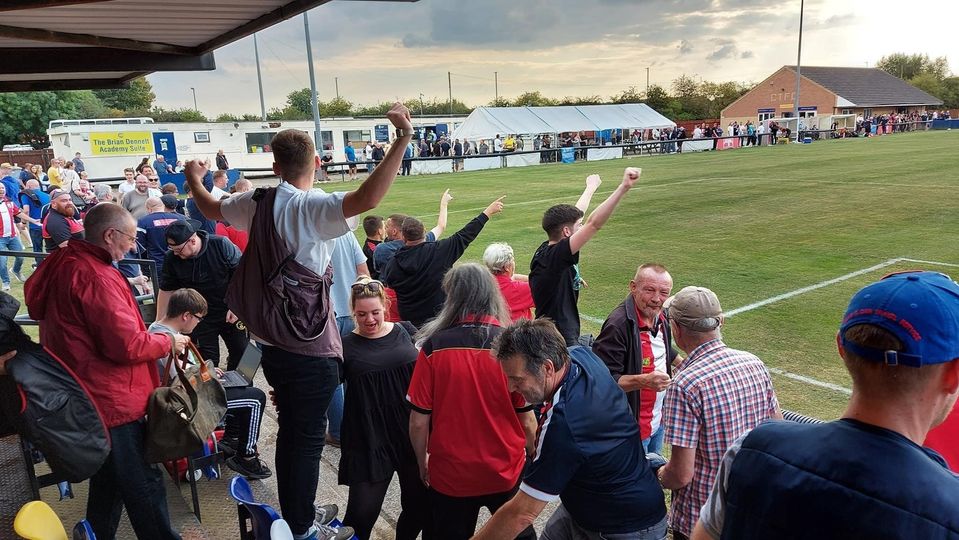 Ilkeston v Shepshed Dynamo. This is it. By 5pm we could be league champions and promoted if we win.
There’s still another game to play next Saturday, but a win today will make Ilkeston virtually uncatchable.
Nearest rivals Chasetown (3pts behind) would need to win both their remaining games – today and next Saturday – by very big scores to have a chance of leap-frogging Ilkeston to the top spot.
But let’s not count our chickens before they’re hatched.
A big, excited, expectant crowd is anticipated at the NMG this afternoon. If you can’t make it, follow the game here from 3pm.
Picture shows Ilkeston fans at Carlton.
Today’s teams –
Ilkeston Town:
1 Saul Deeney, 2 Ollie Brown-Hill. 3 Billy Bennett, 4 Jared Bird, 5 Stern Irvine, 6 Kieran Fenton, 7 Zak Goodson, 8 Alex Troke, Remaye Campbell, 10 Montel Gibson, 11 Jack Thomas.
Bench : 12 Aman Verma, 14 James Reid, 15 Charlie Jamson, 16 Joe Maguire, 18 James Carvell.
Shepshed Dynamo:
1 Brandon Ganley, 2 Jahdahn Harper, 3 Jiah Medrano. 4 Jordan Smith, 5 Jake Betts (C), 6 Niall Prenderville, 7 John King, 8 Toby Ritzema, 9 Demsey Arlott, 10 Matt Melbourne, 11 Reece Morris,.
Bench : 12 Shaquille O’Neil-Brookes 14 Karl Whymark, 15 James Snedden, 16 Matty White.
We’re off. Ilkeston are attacking the car park end.
Confident start by Ilkeston forcing two corners. One ends up on top of the net.
Good run and shot by Gibson but it goes just wide.
GOAL for Shepshed. Reece Morris scores for the visitors on 20 minutes. 0-1.
[Chasetown 1 Sporting Khalsa 0, latest.]
Ilkeston continue to have most of the play but they’re behind.
Shot by Keiran Fenton sails over the bar.
GOAL for Shepshed. John King scores, 32 mins. 0-2. This after some pressure by Ilkeston with Zak Goodson going close.
It’s a nightmare for Ilkeston. The big crowd has gone quiet.
GOAL for Ilkeston. Remaye Campbell heads in from Billy Bennett’s cross. It’s a quick reply, much welcomed by the home supporters. 1-2 35 mins.
GOAL for Ilkeston. Campbell finds the net again. This time he meets Zak Goodson’s header across the box and puts the ball past Brandon Ganley. 2-2, 42 mins.
Half time: Ilkeston 2 Shepshed 2.
HT: Chasetown 1 Sporting Khalsa 0
HT: QPR 0 Derby 0
Well, that equaliser has lifted the Ilkeston supporters. Two nil down was not what they were expecting. Let’s hope for more goals this half.
[Chasetown 1 Sporting Khalsa 1. latest]
[Halesowen 1 Sutton Coldfield 0, latest – Halesowen move into second place]
Ilkeston are really trying to build on their strong finish to the first half. Remaye Campbell is denied a halt-trick by a great save by Ganley. Then Montel Gibson and Ollie Brown-Hill go close.
Still 2-2 after an hour.
Shepshed are a threat when they get the ball. Deeney has had to make a good save and Bennett has made a timely interception. At the other end Montel Gibson has hit Ganley’s chest with a flyer.
Ilkeston forcing several corners.
GOAL for Shepshed. The visitors are back in front. King completes his hat-trick. 78 mins. Ilkeston 2 Shepshed 3.
Alex Troke replaced by James Reid, 80 mins.
It’s agony for the Ilkeston fans – and today’s gate is over two thousand. Time is running out.
It’s all Ilkeston in the closing moments but they can’t score. Reid, Campbell and Gibson have shots stopped.
Into 4 minutes added time.
GOAL for Shepshed. They break away and destroy Ilkeston’s hopes with a fourth goal. Demsey Arlott is the man to break Ilkeston fans’ hearts.
Full time ILKESTON 2 SHEPSHED 4
FT: Chasetown 1 Khalsa 1; Halesowen 1 Sutton Coldfield 1; Yaxley 1 Stamford 3.
Latest top league positions:
Ilkeston, 84 pts. Goals +54
Chasetown, 82 pts. +42
Stamford, 81 pts. +56
Halesowen, 80 pts. +48
Belper, 70 pts. +20
So Ilkeston are still favourites to win the league with all three top teams failing to win today. Stamford’s win takes them into third place. It all depends on next Saturday’s results.