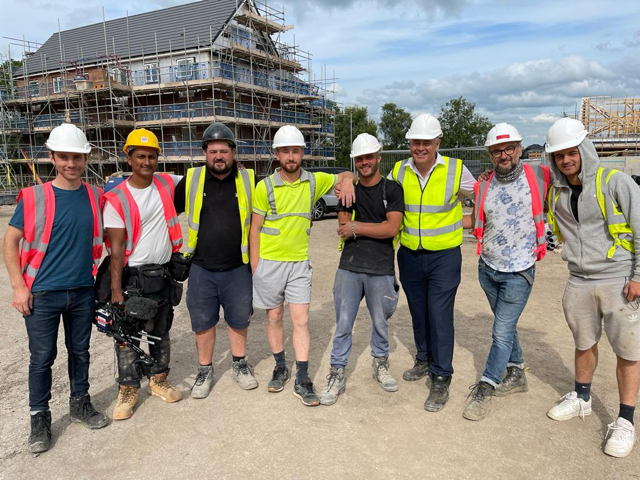 Young bricklayers working for Derby-based Hodgkinson Builders are preparing for TV fame after taking starring roles in a new six-part documentary for BBC Three.
The first episode of the new series, Brickies, is set to be aired on the recently relaunched BBC Three channel at 9pm on Thursday, April 14, and will also drop as a boxset on BBC iPlayer the same day.
It focuses on a team of young bricklayers working for Hodgkinson Builders, based at Pride Park, Derby.
Viewers will be introduced to the building trade’s new TV stars, including Tom Copley and Lucas Robinson, from Nottingham, Jack Smith, from Langley Mill, Jeorgia Purser, from Hereford, Harry Moran, from Ilkeston, and Lauren Hudson, from Heanor.
They will be applying their skills on real building sites across the Midlands under the watchful eye of the company’s founder and managing director Ian Hodgkinson.
Filming took place over more than three months last summer at new housing development sites in Stoke-on-Trent, Northampton, Nether Heage and Ripley, as well as cameras following the young brickies’ home lives.
Ian said: “Hodgkinson builders is nationally recognised as a leading light in the promotion of apprenticeship programmes and encouraging young people to take advantage of the incredible opportunities available to them in the construction industry.
“We jumped at the chance to get involved in this series, and it was an amazing experience for everyone involved. All the guys and girls who feature in the show are stars in their own right, and no doubt some of them will have some real appeal to TV viewers.
“It’s about showing the skills and talents of the exceptional young people in our industry, and how they all have the potential for a great career in a very safe environment.
“The mere opportunity for the public to see, for the first time, what it’s really like on a construction site, with all the health and safety measures involved, and how much youngsters benefit from such a great working environment, will hopefully do wonders for the future of our industry.
“During this series, we genuinely see the sense of achievement experienced by young people building their own dreams at the same time as literally building dreams for other people.”
Hodgkinson Builders, which launched in 1990, is no stranger to the limelight. In 2016, Ian led a group of young brickies to Parliament, where they built a wall beneath Big Ben to encourage more young people to consider bricklaying as a career.
And, last year, Ian released a 96-page white paper to highlight the current crisis in social housing and suggesting ways the Government could help turn the situation around.