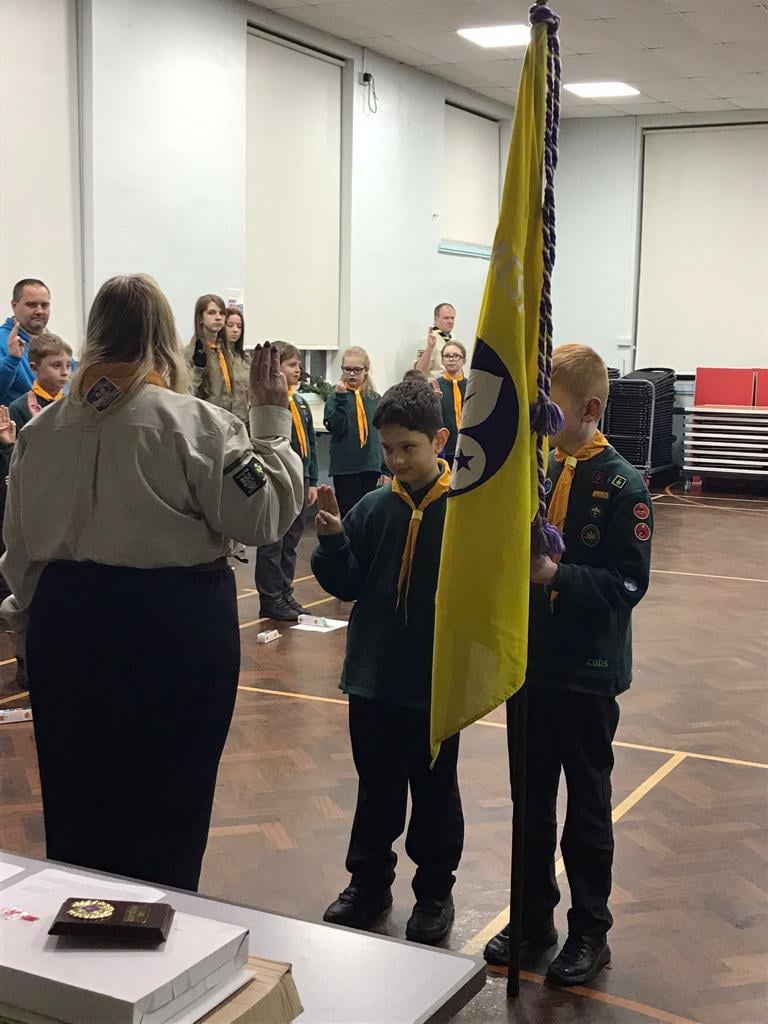 The 21st Ilkeston (Kirk Hallam) Cub Pack had a very special Open Night and Awards Evening. It gave parents the opportunity to see what the Cubs do on a Monday night. Five older cubs were running the evening in order to complete their Silver Chief Scout Awards. They did some compass work, mapping, bandaging, knotting and road signs.
At the end of the evening Akela, Diane Harris invested a new Cub – Bailey.
Annual participation awards and activity badges were then presented. Cub of the Week went to Imogen.
Fifteen Challenge badges were awarded which have many elements to them:- Outdoor, Personal, Skills, Team Leader, Teamwork & World.
Cub of the Month remained with Jasmine for the second month.
Diane then in her Group Scout Leader mode gave leader service awards certificates to Caroline Baker (Mysa) 5 years and with much pleasure Liz Barratt (Baloo) 25 years. They were thanked for the time and effort they put into Scouting.
Silver Chief Scout Awards, were then presented to Baylee Provins, Amelia Moore, Jack Brown, Jack Wesson and Imogen Law. They were told: Well done to you all – this is a fantastic achievement, wear your badges with pride.
Chief Scout Awards are the best the young members can achieve in the Cub section.
The Leader Team were also thanked for their dedication and work through the pandemic, including taking part in zoom meetings.
Diane said: “Scouting cannot happen in Ilkeston without the dedication of all its leaders and helpers. Volunteering with Scouting can be as flexible as you need. We are currently looking for a new team leader/s as well as other district roles. Or you might prefer to be with a Group. As life returns to normal, we are having lots of new enquiries for young people to enjoy the benefits of Scouting. So, if you are interested in lending a hand, please do get in touch via email: [email protected] Or if you want to pick up the phone, ring Diane 0115 932 9979. We are happy to answer any questions.”
Photos:
Bailey with sixer Jack being invested;
Recipients of Silver Chief Scout Awards;
Diane Harris and Liz Barratt who has completed 25 years.