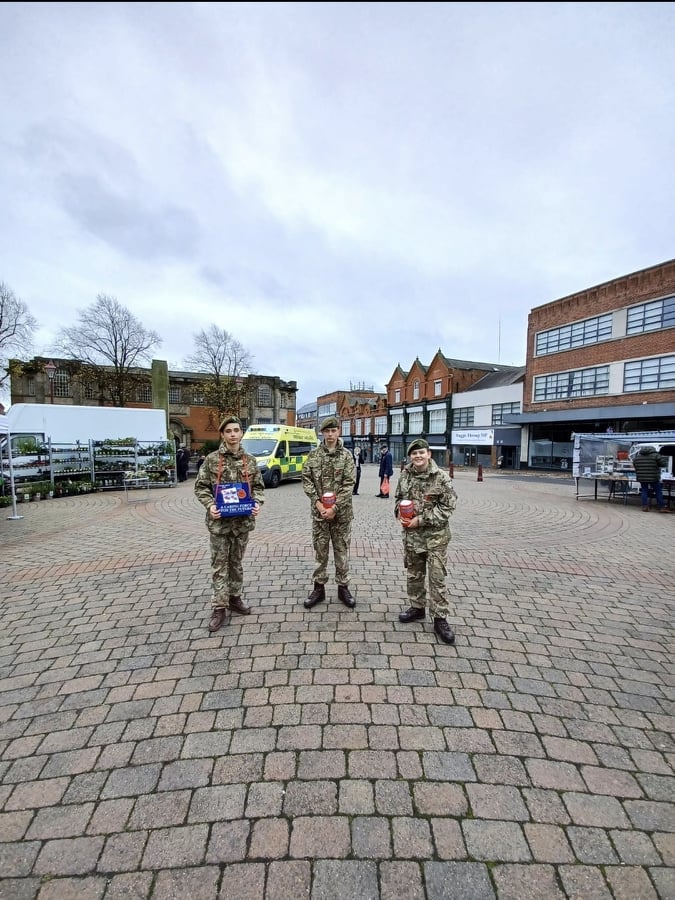 Army cadets sprang into action
Four poppy-selling Ilkeston Army Cadets have been commended for helping a woman who had collapsed in Ilkeston town centre.
Lance Corporal William Smedley, Lance Corporal Stephanie Wragg, Cadet Alfie Smedley and Cadet Gavin Bostock-Davey quickly sent word to their adult instructors and began to administer first aid.
The cadet force issued a statement from SSI Chadwick, Public Liaison Officer for Derbyshire, saying:
“L/Cpl Smedley and L/Cpl Wragg immediately highlighted the situation to SI Herbert and SI Bowey before heading to the lady, surveying the scene and beginning first aid.
“Whilst remaining calm, they delivered first aid to the lady, ensuring they reassured her throughout. During this time, Cdt Bostock-Davey and Cdt Smedley went into a local shop to ask for blankets to help with the cold temperatures.
“Once the lady had become conscious, the cadets asked the lady about her medical condition and called for an ambulance for her.
“Once the ambulance was on the scene, they relayed important information they had witnessed, including how long the seizure was, how old the lady was and her medical history. As the ambulance left, the cadets were thanked for their brave efforts and for all they had done.
“A huge well done to these cadets – and adult staff – for handling the situation so capably. They were a credit to Derbyshire Army Cadet Force and it goes to show the true extent the experience of being a cadet can have on a young person.”
The incident happened on Ilkeston Market Place on Saturday 6th November.
Jemma Smedley, mother of two of the boys involved, said: “I am so proud of William and Alfie for what they did today especially as William has epilepsy himself…he was on the other side of things today.”
William said: “I was shocked when I witnessed the lady collapse and begin having a seizure. But with the training I have had from the Army Cadet Force, I was able to stay calm and send another cadet to find one of the adult instructors for guidance.”