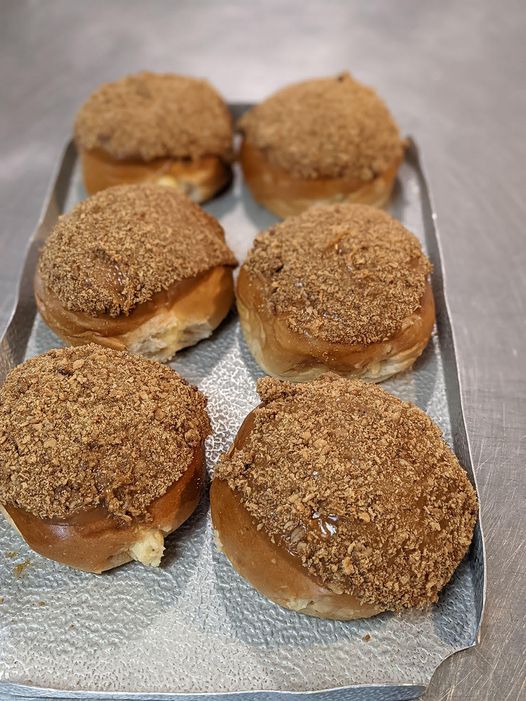 A family run bakery is launching a new doughnut with the unusual addition of a flapjack crumb following a huge increase in sales of both types of product.

Stacey’s Bakery, which has a bakery and stores in Ilkeston, Eastwood and Heanor, has seen flapjacks ‘selling like hot cakes’ recently, so came up with the idea of combining it with the ever-popular doughnut.

The new flapjack-crumb, caramel and custard doughnut is described by the bakery as ‘the best of both worlds’, particularly when people love both products but can’t decide which one to buy.

The enriched brioche doughnut bun, which is baked, not fried, is filled with custard and topped with a caramel icing before the special ingredient – the flapjack-crumb – is sprinkled on the top.

Doughnuts have always been a steady seller within the shops – both jam and fresh cream versions – and flapjacks are very popular, selling around 500 per week at the last count.

David Stacey, managing director of Stacey’s Bakery, said: “It’s very interesting to see how people’s preferences change over the years – yet we still see the old favourites coming back time and again.

“Flapjacks have really been selling like hot-cakes lately. They seem to be as popular with our younger customers as with our older ones – and, given the growing popularity of surprising and unusual doughnut flavours in recent years, we thought it would be a great idea to combine the two things.

“Flapjacks are a good-value, filling treat, particularly in the colder autumn weather, so we’re really looking forward to seeing how well these go down with our customers.”

Stacey’s Bakery, which has branches in Ilkeston’s South Street and Bath Street, as well as Nottingham Road, Eastwood and Market Street, Heanor, bakes everything by hand to recipes that have been in the family since the early 1900s.

A bullet fired during the First World War gave rise to a business that is now being run by the family’s fourth generation of bakers. David’s great grandfather, Guy Stacey, became the family’s first baker when the bullet invalided him out of the army during the war.