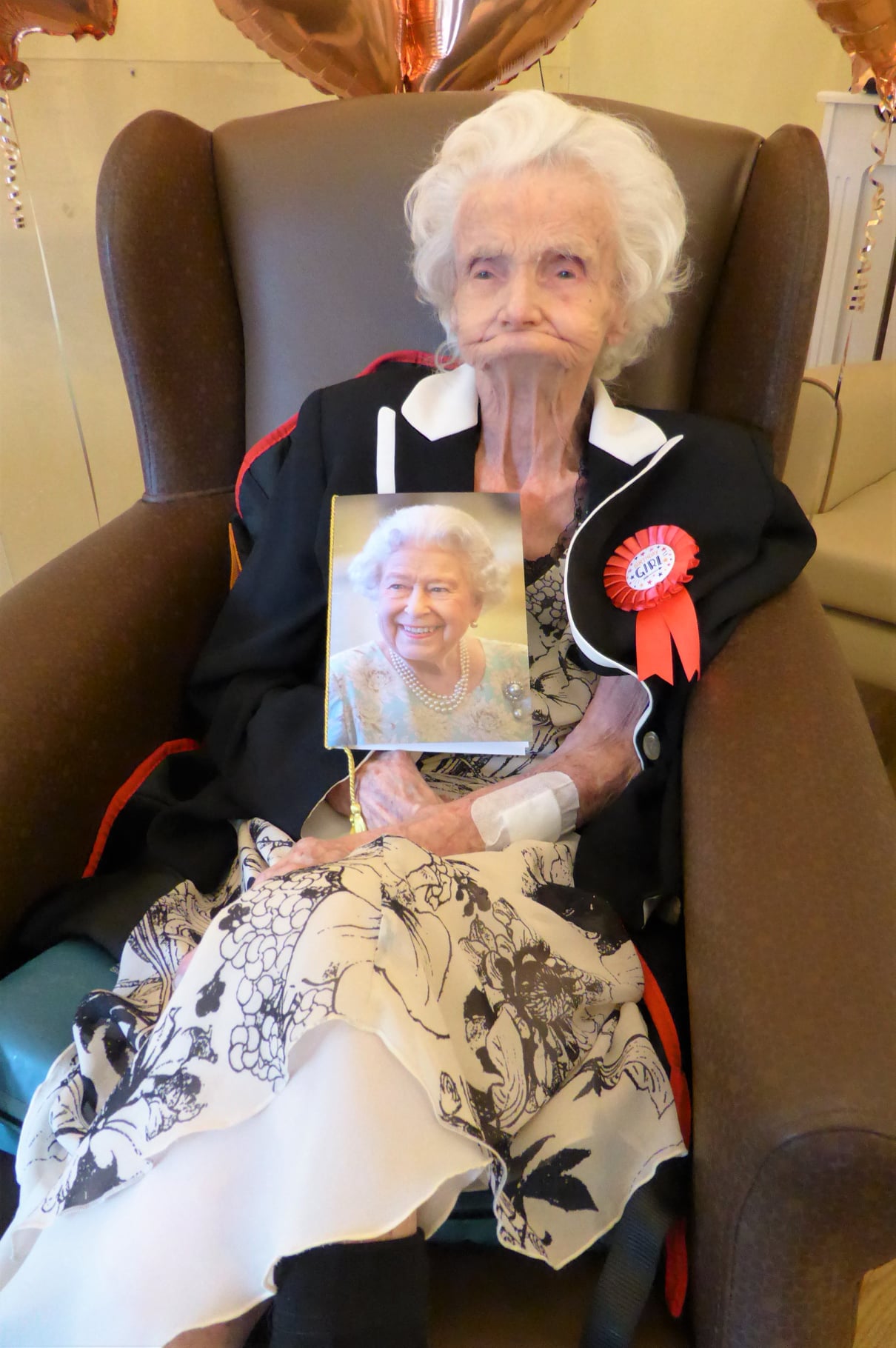 Dilys Myfanwy Rose Biggs celebrated her one hundredth birthday in Rutland Manor Nursing Home on Monday 18th October.
Family and friends joined staff at the Heanor Road facility to wish her well on her special day.
Her son Neil told us: “Mum was born into a family of five. She had four brothers Ronald, Ken, Malcom and Paul. Her parents were Etta and Herbert Newton of 8 Nelson Street, Cotmanhay.
“Life was hard in those days and they all had to work, Mum’s first job being a lift operator at Carrier & Sons Ltd., later moving on to their cutting section in the hosiery department. She soon became skilled in that trade and moved to Booths Hosiery factory on Awsworth Road, Ilkeston where she worked until the onset of the second world war. She was then seconded to help the war effort by working at Stanton Ironworks helping on the production of bombs.
“In 1942 she met my dad Arthur Biggs who also worked at Stanton. They had a hard but happy life resulting in two children, myself Neil Biggs born in 1948 and Janis, now Eaton, born eleven years later.
“They were married for 63 years until my dad died in February 2008, aged 86. Mum had four grandchildren, Lindsey, Kirsty, Nicholas and Natalie and four great grandchildren Jacob, Rosie, Blake and Amelia, all of whom she loved greatly.
“Mum loved old time dancing with dad, who had two left feet according to Mum. They enjoyed many dancing holidays with various dancing clubs around the Ilkeston area.
“Sadly, after dad died Mum started with dementia which gradually got worse until she had to go into a home. She is now in Rutland Manor Nursing home, who have looked after her with great skill and care. I need to thank all the staff for their kindness on her birthday by laying on a lovely buffet and segregating the conservatory for the family to visit (after Covid Tests permitting) to celebrate her achievement in reaching 100 years of age and receiving a beautiful card from the Queen which she had set her heart on many years before and with my constant encouragement she did it.
“There is much more to Mum’s life which these few words do not cover. Sadly, dementia robbed her of her memory, but on her birthday she actually became lucid and came back to us for short time and remembered some of us. It was amazing.”