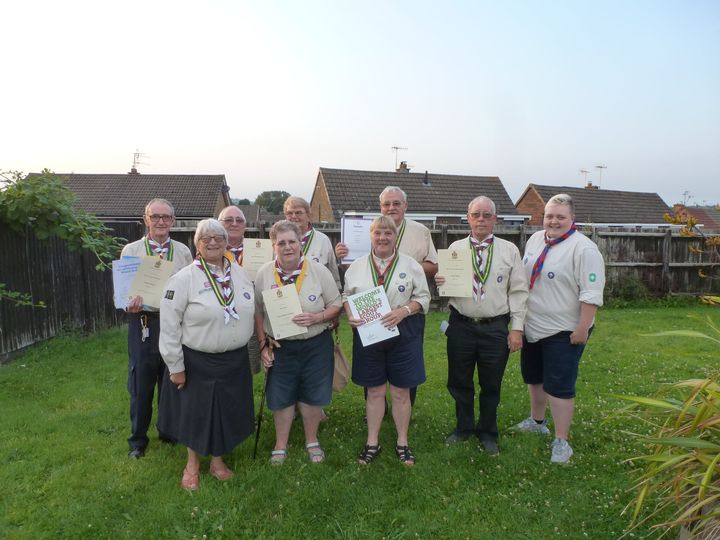 The members of the Scout Active Support (SAS) were finally able to meet and hold their AGM.
It was decided to make the evening special so the meeting took place at the Cat & Fiddle after the members enjoyed a nice meal.
Following the AGM, Diane Harris – District Cub leader, on behalf of the County presented the following awards:-
Tony Rogers – Wood beads (training award) and Bar to the Medal of Merit
Keith Mellor – Bar to the Medal of Merit
Mary Checkley – Silver Acorn
John Checkley – Bar to the Silver Acorn.
Also, re presented Silver Wolf to Keith Hooley.
Diane felt really privileged and proud to be given this role and award the well deserved medals. All of the Chief Scout Medals are for services above and beyond the individual’s Scouting role.
The team are known for the catering skills within the district and county!
Margaret Hooley presented Diane with her Wood beads (training award for GSL).
Prior to the meeting Diane had been out and about delivering other awards to district members.
Edward Holwell – 5 years Service Award
Bridget Langton-Lievers – Wood beads (training award)
Margaret Lane – Chief Scout Commendation for Good Service.
Groups Scout leaders were also given other awards to be presented to their own leaders.

Scouting cannot happen in Ilkeston without the dedication of all its leaders and helpers. Volunteering can be as flexible as you need, In fact we are currently looking for a new team leader for Ilkeston – interested?, see contact details below.
Throughout the district we are having an influx of new enquiries for young people to enjoy the benefits of Scouting, however we can’t deliver the adventure without extra pairs of hands, if you can spare anytime please get in touch via email: [email protected] Or call Diane on 0115 9329979. We are happy to answer any questions.
#goodforyou