A Letter From Windsor Castle… 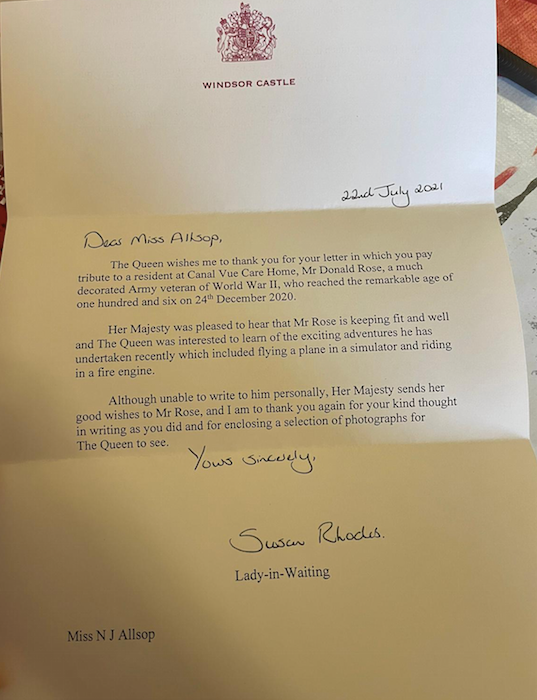 A Letter From Windsor Castle

Staff and residents of Canal Cue Care Home have taken special delight in receiving a letter in the post from Her Majesty the Queen, acknowledging the tribute to 106 year old war veteran Donald Rose.

The letter acknowledges news of Donald achieving his bucket list dreams thanks to Canal Vue Care Home Activities Coordinator Naomi Allsop. From riding in a fire engine to flying a plane in a flight simulator, Her Majesty was interested to learn of his exciting adventures.

Susan Rhodes Lady-in-Waiting, wrote that although Her Majesty was unable to write personally, she would like to thank Naomi for her kind thought in writing and sends her good wishes to Mr Rose.

Naomi says: “I never thought I would receive a reply but I am thrilled I did. I wanted Her Majesty to learn of Donald’s adventures but also understand how much of a feat it was for him to achieve them at the wonderful age of 106.”

In addition, Robert Courts MP, Minister for Aviation, Maritime and Security also sent a letter congratulating Donald for realising his dream and hoping it would serve to inspire others to do the same.

He wrote: “I have no doubt your achievement and determination to fly, at the age of 106 years, will serve to encourage others to involve themselves in the world of General Aviation and to realise their dreams as you have done, without anything holding them back.”

Canal Vue Care Home is a covid-safe place to live. It is a purpose built modern residential care home designed to provide the very best in residential, dementia care and respite for older people. Situated in a scenic and peaceful canal-side setting, the home offers convenient access to Ilkeston railway station or the M1 and is less than 7 miles from the centre of Nottingham. Managed by a highly skilled and experienced team of carers, comfort in a safe caring environment awaits you with a very warm welcome. www.eastgatecare.co.uk