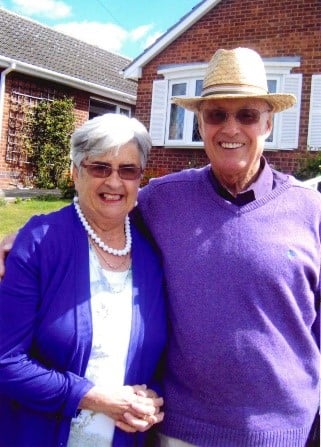 A new website has been launched during national Grief Awareness Week (2-8 December) offering information about support available to bereaved people living in Derby city and Derbyshire.
The Derbyshire Bereavement Hub brings together a variety of local organisations offering free or not-for-profit services including 1-1 support, groups, programmes and specialist provision for different types of bereavement.
Amongst the Hub members is local charity, Treetops Hospice Care, which provides counselling for bereaved children, adults and families.
Carol Stevenson, Treetops Therapeutic Services Manager, explained more about the new website:
“The Derbyshire Bereavement Hub and the new website provides an information network to ensure that bereaved people are linked to the most appropriate services and get the best support they can.”
Amongst those who have benefitted from the Derbyshire Bereavement Hub is Anita Allen, 80yrs, from Ilkeston.
Anita’s husband, David, was diagnosed with Pulmonary Fibrosis and died last year. Anita and David had been married for 56 years and Anita explained more:
"David and I met at a dance, immediately following his discharge from the Army. He said he had no money then, and never had any since! He was different from anybody I'd ever met before; he was the first person to show me any real kindness. We were absolute opposites. I never stopped talking, and he was the quietest person you could ever wish to meet. We didn't need anyone else. He was my best friend.

“He was a fitter at Stanton and we both had a love of camper-van travel. David loved to plan (he was known as the ‘man with the maps’). He took me anywhere I wanted to go, the furthest being mainland Greece. France was an annual pilgrimage. We loved the life and the freedom, and of course, meeting new people.”

In 2010, David was diagnosed with the lung condition Pulmonary Fibrosis, for which there is no cure.

“David started going to Day Care at Treetops. It made such a difference to him. He loved his meal, and the drop of beer to go with it! He was quiet when he got there, but it was accepted. He wasn't hassled to speak, just allowed to sit quietly. The fact he was being cared for and there were people who understood him – he loved to go. It took the pressure off me for a while, and we were both so grateful for the care and understanding shown to him.

“As time went by, David became frightened – of what lay in the future. I asked if someone could talk with him about it, and one day, a gentleman was there at Treetops waiting for him to discuss the very thing – to listen to him and his fears. It really did help him, and was very much appreciated.

“At the same time, I asked if both of us could have counselling at Treetops. I was accepted first, but sadly David died before it could be arranged for him.”

Anita continued with regular counselling whilst a post mortem and inquest were carried out. It was confirmed that David’s condition resulted from exposure to asbestos in the workplace.

"My counsellor was supporting me every step of the way. On learning of the exposure to asbestos, she immediately gave me a leaflet about the Derbyshire Asbestos Support Team (DAST) and suggested that I would find them very helpful. At the time I was grateful, but not inclined to start letters or make calls. I'd only just lost David."

DAST, based in Chesterfield, provide a free service for victims of asbestos-related diseases and their families.

"In due course, I made contact with DAST and Jo came out to see me at home. She was very kind at a time that was very emotional for me. She made notes, asked questions and began to make applications for benefits, which was all new to me.

“She took up the case and all the paperwork, and the benefits were paid posthumously. I never expected it at all. I was absolutely amazed. I couldn't have taken it on or coped with that on my own. I really felt justice had been done for David.

“Without the team work between the two organisations and the expertise of Carol and Jo, none of this would have been possible.”

Anita made a donation to both Treetops Hospice Care and DAST to thank them profusely for their help and support.
Derbyshire funeral directors, Wathall’s, who also offer Dandelions Bereavement Support, donated over £3,000 to develop the website and Bereavement Hub logo and provide ongoing support for the site.
The Derbyshire Bereavement Hub website can be found online at www.derbyshirebereavementhub.co.uk.

The Hub, which began in 2015, is affiliated to the National Bereavement Alliance.