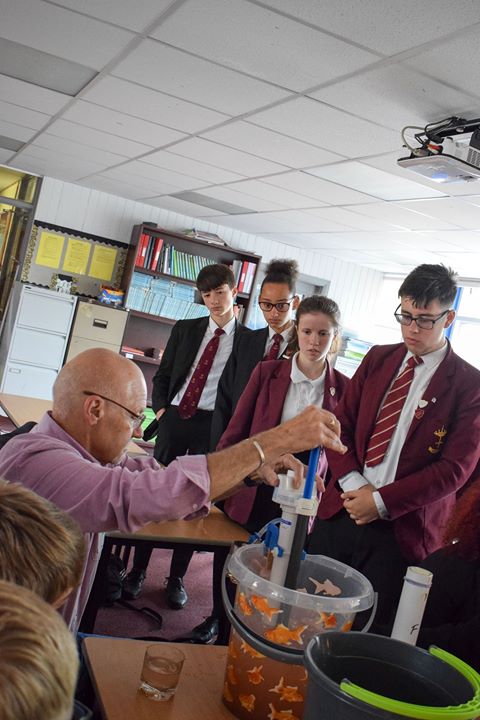 Students from Saint John Houghton Catholic Voluntary Academy heard about the life-saving work being done by the Aquabox charity.
Representatives from the charity addressed Erewash Youth Form at Saint John Houghton CVA in Kirk Hallam.
Students from Kirk Hallam Community Academy and Wilsthorpe Community School also attended.
Since its formation by the Rotary Club of Wirksworth in 1992, Aquabox has distributed more than 110,000 boxes, including a water filtration system, to hundreds of thousands of people in over 50 countries hit by earthquakes, tsunamis, landslides. The charity has saved numerous lives by helping people in distress to make dirty water drinkable again.
Trustee Roz Adamson talked to students about the charity before volunteer William Jones demonstrated the water filtration system.
Roz said: “If you have unsafe water you die. We have sent boxes to a whole series of disaster areas, including Cameroon, Nepal and Kerala and our current priority is The Yemen.
“We know how important it is to get the message to young people about what we do. You can help in some way to spread the message about what we do.”
Sienna Grant, Head Girl at Saint John Houghton, said she was impressed by the charity’s work.
She said: “I can see that by having one of the Aquaboxes can help a lot if you are in a disaster area and I definitely think it’s something we should be supporting in school.”
Jim Nash, teacher at Saint John Houghton CVA, said: “The Erewash Youth Forum is currently making significant in-roads in supporting charity work across the Erewash District. The SJH youth forum is currently working on various fund-raising schemes supporting both the pupils of SJH and the wider community of Erewash. The Erewash Youth Forum is a great way for the students of SJH to make their voice heard at local level on the issues that affect them.”

Its aims include listening to and speaking for the young people of Erewash, promoting equality for young people and helping them to be more involved in decisions that affect their lives.