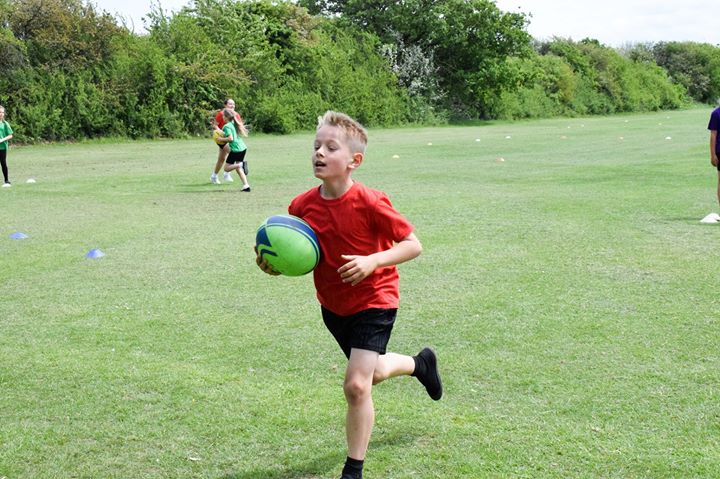 Primary school pupils gave rugby a try at a festival organised by Erewash School Sport Partnership.
The rubgy mega-fest took place at West Park in Long Eaton and was hosted by Long Eaton RFC.
Schools that took part included Cloudside Junior in Sandiacre, Grange Primary in Long Eaton, Sawley Junior, Dovedale Primary in Long Eaton, Ashbrook Junior in Borrowash, Draycott Primary and Brooklands Primary in Long Eaton.
Pupils played games including rob the nest, ball touch, break-out tag, five pass and end ball.
John Welham, from Long Eaton RFC, said the aim of the event was to give pupils the chance to try rugby and to get them outside and active.
He said: “I did notice a few of our children who came in their rugby kit but generally a lot of the children at this event might never have tried rugby before. I think the perception is that rugby is a contact sport but it’s actually an evasion game and a lot of the games they played were all about evasion. The skills you need are passing and catching and it’s very closely linked with netball and basketball. It would be great if a few of the pupils decided they’d like to come along and try rugby with us but ultimately the event was all about getting young people outside doing some exercise.”
Rhian Lilley, Erewash School Sport Partnership development manager, said everyone had a great time at the festival.
She said: “It was great to see so many pupils enthusiastic about trying what would have been a new sport for a lot of them. We would like to thank Long Eaton Rugby Club for hosting and supporting the event and we hope that some of the young people who attended might think about going along to one of the club’s sessions.”
Long Eaton RFC holds mini sessions for young children and more information can be found by visiting https://www.pitchero.com/clubs/longeaton/
Notes to editors: Erewash School Sport Partnership is a group of 45 schools working together to develop PE and sport opportunities for all young people. Its core priority is to improve the quality and quantity of PE and sport in schools. The partnerships aims to engage, motivate and include as many young people as possible in a positive PE and sport experience.