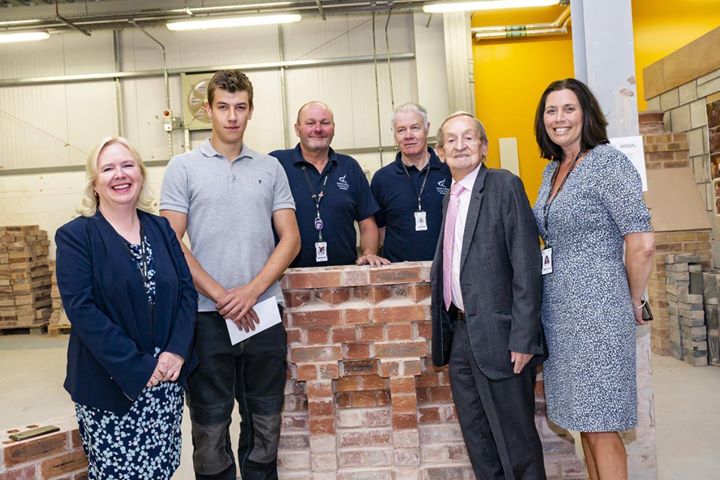 Bowmer + Kirkland have awarded an annual bursary for the past ten years since the company completed the £48 million refurbishment and construction project to create The Roundhouse Professional and Technical Skills college in Pride Park in summer 2009.

To mark the tenth anniversary of the opening of the college, B+K Chairman John Kirkland awarded two bursaries this year.

Thanks to the skills he had developed at College, he secured an apprenticeship with KR Brickwork in Belper and returns to DCG’s Construction Academy in Pride Park on day release.

Max Bowler said: “I owe the College so much in developing my brickwork skills so that I stood a better chance of getting an apprenticeship after leaving school.

“I am honoured to have been awarded this bursary and I plan to put it away and potentially use it for Professional Construction study in the future.”

He was unable to attend the presentation and his tutor Phill Hague said: “Ben is an exceptional student – going above and beyond to quickly progress from level one to two.

“His goal is to find an apprenticeship and I have no doubt that he will be an exceptional electrician in years to come.”

Mr Kirkland continued: “We set up the bursary soon after the Roundhouse officially opened to students in 2009 to support young people starting out in their career in construction.

“Both of these young men are evidently working hard to gain the qualifications and skills that are so badly needed to address skills gaps in the construction industry and I hope that the bursaries will inspire them to aim high.”

DCG Head of Construction Eileen Swan concluded: “We are very grateful to Bowmer + Kirkland for supporting our Construction apprentices and students with this annual bursary.

“We hope that these bursaries inspire Max and Ben to continue with their studies as they progress through their careers in the Construction industry.”