Mum fundraises for hospice in memory of late father… 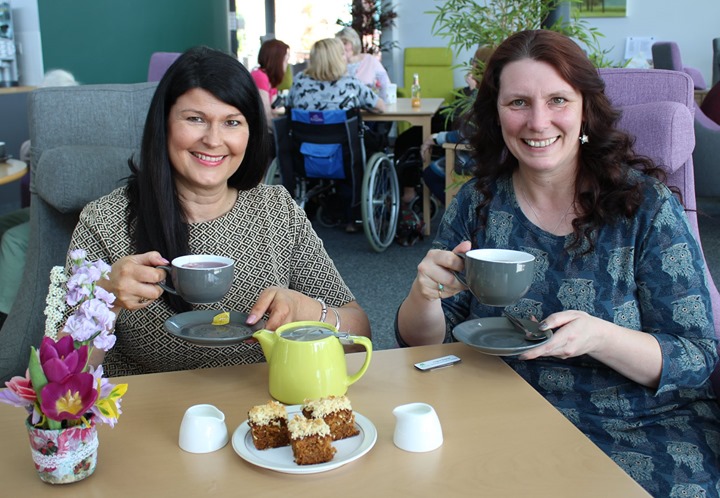 Mum fundraises for hospice in memory of late father

Karen Hall, from Ripley, is fundraising for Treetops Hospice Care to say thank you for the nurses who cared for her dad at home in his last days of life.
Treetops, based in Risley, provides nursing care and emotional support for adults with life limiting conditions living in Derbyshire and Nottinghamshire.

Karen, 46yrs, is hosting a ‘Tea for Treetops’ fundraising party on what would have been her dad’s 80th birthday.

“Dad died just ten days after coming home from hospital. He was discharged on a Saturday and it became very clear on the Sunday that we were not going to be able to cope. He just deteriorated overnight.
“The referral was made to Treetops on Monday and we had our first nurse that very same night. Treetops were able to provide us with eight nurses – a nurse for every night that we needed support.
“Dad’s wish was to die at home. He didn’t want to go back into hospital or into a nursing home. He didn’t want to be in a clinical environment or have the constraints of hospital. The difference for him being at home was really important.
“We could not have coped or met his wishes if we’d not had the nurses from Treetops – it was that vital.
“Those few days will stay with us forever. We were broken and in shock but what we’ll remember is the support at night time. Things are very different at night – you feel very isolated and you know that the same services are not available to you at night, as they are in the day.
“The nurses always called ahead before they arrived – to introduce themselves and check on dad’s condition and that meant it put us at ease for who were expecting that night. Although the nurses were all very different, they were all respectful that it was dad’s home and all incredibly kind.
“They all wanted to know more about dad so they could absolutely do the best for him which meant so much, but there would also be a certain point when they’d just send us to bed to get some sleep.
“There’s six of us and we had a rota of care. I’m the closest and my work were particularly flexible and gave me time off so I was able to go most often. To have a bit of time to recharge your batteries and to know they were there looking after dad at night – it made a hideous time more special. It meant we could get some rest and gave us the confidence that we knew what we were doing. It allowed us all to still function within our own families. We will be forever in Treetops debt as a family, always.”
Karen describes her dad as ‘her rock’ and a family man of many talents:
“For a quiet chap, dad knew so many people and had lots and lots of hobbies. He started an indoor model aircraft club in Heanor which is still running and that’s his legacy. Dad was very entrepreneurial and made model toys – my daughter has a lorry and a land rover that her grandad built.
“Dad was a poet amongst all his other million talents and when he was at home, I was able to read back to him the poems that he’d written over the years. It was those little moments I’ll hold onto forever.
Karen said:
“The fact dad was at home meant his friends could come and see him and say goodbye. We were also able to play his music whenever he wanted.
“Treetops’ support transformed what was an absolutely horrendous time into something manageable and empowered us to care for dad. The nurses gave us reassurance that we were doing the right thing.
“Their expertise meant they knew when dad was uncomfortable – when we didn’t know and couldn’t always see. They could organise extra pain relief quickly but also explain to us what to look for in the day time as well.
“Dad died twenty minutes after the last nurse arrived. I think he knew and he was waiting to make sure we wouldn’t be alone with him. He was worried about us right to the very end. I firmly believe dad did not suffer at all in that period of time that he was at home. He was completely comfortable and at ease.”
Karen’s Tea for Treetops party is just one of several ways, her and her family have been supporting Treetops:
“The support really is priceless and you don’t realise or appreciate it’s even available until you need it. We were stunned as a family and thought it was amazing.
“We decided we wanted to pay Treetops back for the nurses they provided for us, so would go ahead with dad’s birthday party but have it as a fundraiser event. We want other people to be able to receive the level of care we did.
“So far we’ve raised over £1,600 from donations made in lieu of flowers at dad’s funeral and we sold lots of dad’s model aircraft, boats and equipment to friends.
“At the tea party, we’ll have lots of cake, afternoon tea and sandwiches, a raffle, tombola and coconut shy and we’re hoping for lots of family and friends to come along.