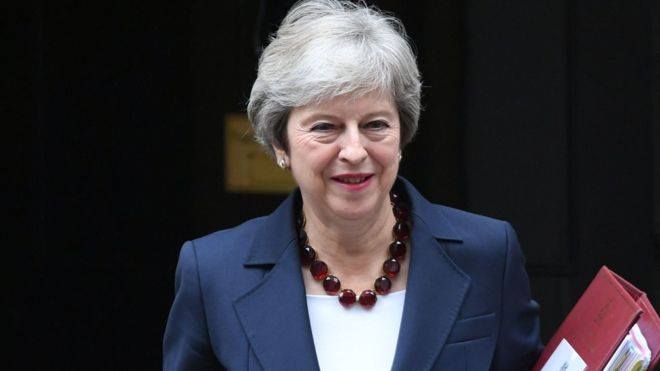 Prime Minister, The Rt. Hon. Theresa May MP, has congratulated Ilkeston Town FC on their promotion to the Evo-Stik Division One East during Wednesday’s session of Prime Minister’s Questions in the House of Commons.
Response to a question by Erewash MP Maggie Throup about the contribution grassroots football clubs make to local communities, The Prime Minister paid tribute to the Ilkeston Town’s achievement and wished them ever success for next season.
During PMQs Maggie asked the Prime Minister:
“Mr Speaker, while Arsenal may be chasing a Champions League spot, Ilkeston Town are celebrating their promotion to the Evo-Stik League division one east. Will my right hon. Friend outline what the Government are doing to support grassroots football, which is so vital to our communities, and will she join me in congratulating the Robins and wish them every success next season?”
To which the Prime Minister responded:
“First, I congratulate Ilkeston Town on their promotion, and I wish the Robins all the best for the next season. That is a good example of how grassroots football can benefit local communities, and it is important that we are putting more money in. Over four years, almost £100 million of public money is being used to help build and upgrade artificial and grass pitches, encourage greater participation and enhance coaching programmes. That includes creating new and improving existing community football facilities through the Football Foundation. We are committed to playing our part in improving and strengthening grassroots football in this country, and the Robins are playing their part in showing the benefit that has for local communities.”
Following the session, Maggie added:
“We are extremely lucky in to have a number of successful community football clubs in Erewash, including Long Eaton FC, Sandiacre Town FC as well as Ilkeston Town FC.
“These Clubs are often the first experience young people have of the beautiful game and they play an important role in promoting a healthy and active lifestyle through their close work with our local schools.
“I would again like to congratulate Ilkeston Town on their promotion and look forward to cheering them on from the touchline next season.”