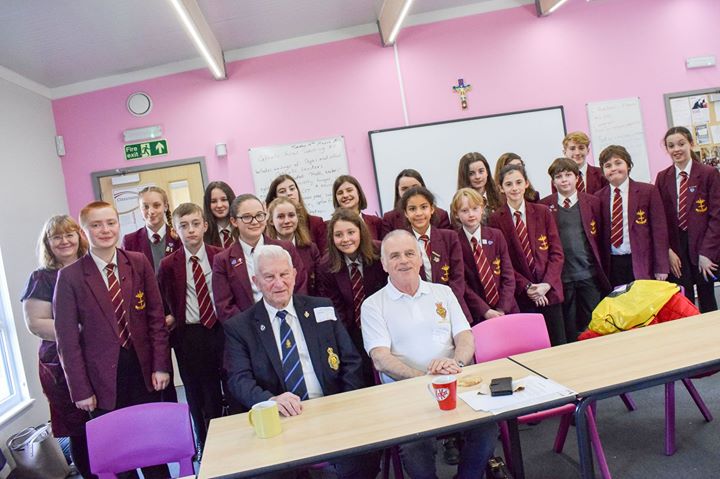 Students at Saint John Houghton Catholic Voluntary Academy are to forge links with the Royal British Legion after meeting two of the organisation’s members.
Arthur Norman, 86, and Paul Scott, 67, visited Saint John Houghton CVA to meet members of the school’s Justice and Peace group and students studying history.
The pair first came into contact with the school when they helped provide poppies on Remembrance Day and were invited to meet students by school lay chaplain Rachel Rose.
There are now plans for students to visit local care homes to talk to RBL members who live there and to fundraise for the RBL.
Paul was in the Royal Artillery and he shared stories with the students and answered their questions.
He said: “There have been a lot of developments over the years and now the Royal Artillery has more drones than guns. Soldiers now also carry a piece of kit like a phone and they can see and talk to anyone anywhere in the world I was in the Army for 12 years and Arthur was in the Navy. I enjoyed it and would do it again.”
Paul also told students about the different coloured poppies that are made for Remembrance Day.
He said: “People often think that poppies are red because of the blood that was shed. That is a fallacy. Poppies grow well in disturbed ground and at the end of the war in the spring poppies grew where the battles were fought. Purple poppies are for the animals that served and they might have been horses, dogs and pigeons, there were lots of pigeons in World War One.”
Both Arthur and Paul encouraged the students to consider joining the air cadets.
Paul said: “Joining the air cadets doesn’t mean you are going to go to war. You will learn skills such as how to work in a team. It’s also about discipline and comradeship. You learn to rely on people. You don’t have to go into the forces, it’s just a group of youngsters who get together and learn and respect other people.”
Rachel said: “It was an honour to welcome Paul and Arthur from the Royal British Legion to our J&P meeting. They shared their memories with the J&P Group and history students. I will be in contact with both of them about organising future events.”

Finn Sherwin, GCSE history student, said: “It was a great opportunity to bring history alive but it was also chilling to think that so many lives had been lost.”
Student Olivia Drummond said: “It makes the work of J&P even more urgent because there are so many wars happening today and we need to learn from the past.”