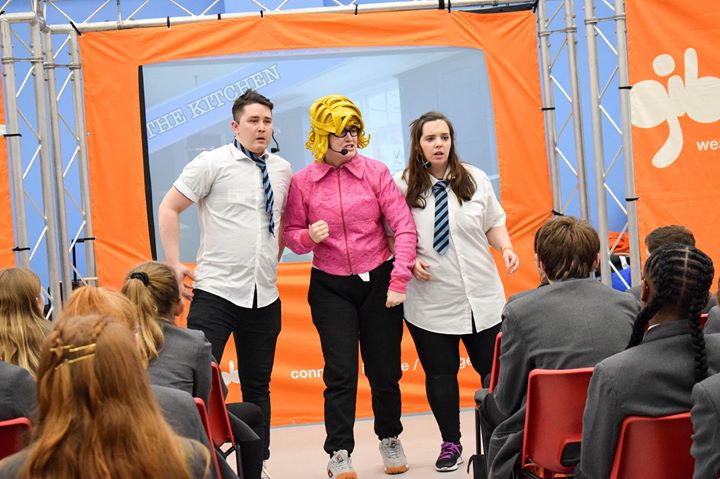 Students at Ormiston Ilkeston Enterprise Academy were urged to make a pledge to protect the environment during a theatre company workshop.
The whole of Year 8 took part in a programme called Waste Watchers, which is led by theatre company We Are Gibber and funded by Derbyshire County Council.
The session started off with all students watching three actors from We Are Gibber playing the role of students and a teacher talking about issues such as what to do with electrical goods when they are no longer needed.
The use of contaminated plastic was also discussed and students were urged not to place dirty items in recycling bins as this can result in everything inside the bin having to go to landfill.
The topical issue of plastic was raised and students were told that 16 million plastic bottles a year do not get recycled. Students heard how plastic gets into the sea and they were also told about a Derbyshire County Council recycling scheme called Pass It On, which supports the recycling of unwanted items.
They watched a short video about how Derbyshire County Council recycles food waste before being told that the average family wastes £800 of food every year.
Students then took part in a workshop during which they learnt the importance of the 3Rs and considered what actions they could take to reduce, reuse and recycle their waste to help protect the environment for themselves and future generations.
They were also asked to guess how long it takes for different objects to decompose such as a mobile phone and a plastic bottle.
During the workshop students were asked to make a pledge to help the environment which could have been about recycling more waste or cutting back on the use of plastic.
Rebecca Graham, from We Are Gibber, said: “We talked to them about the length of time certain things take to decompose and most of the them don’t realise that a nappy, for example, can take 400 years to decompose. We also ask them to make a pledge, so something they can do day to day that will make a difference and help to protect the environment.”
Amanda Cartwright, Head of Year 8 at OIEA, said: “For me personally, I took from this that there clearly is no such thing as throwing away our waste. I thought I was really proactive regarding recycling, always hunting down the correct coloured bin, however, I learned from the workshop that everything has a place and I will be adopting new habits from now on.

“As for the students, they really enjoyed the workshop and said that they gained a much better understanding of what we should be recycling both in school and at home. Some of the students remarked, that it had been interesting for them finding out what items are actually made from. The workshop gave them a great opportunity to explore what recycled materials are made into.”