Sweet Success of Stacey’s Mince Pies as 16,000 are Munched at Christmas… 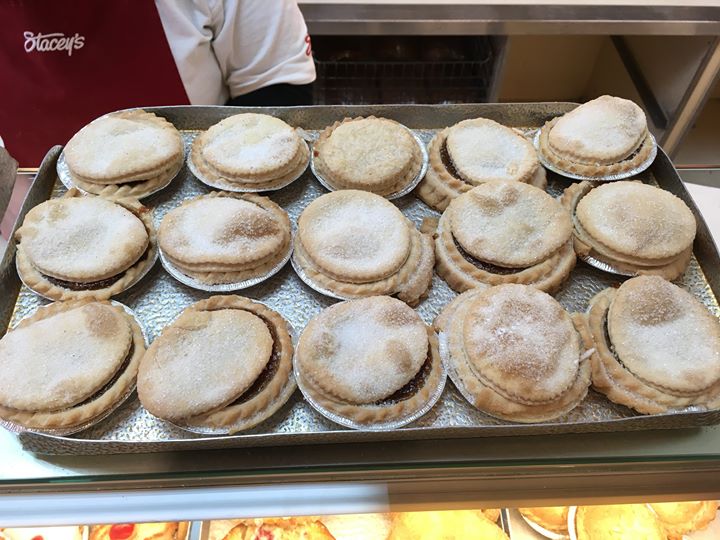 Sweet Success of Stacey’s Mince Pies as 16,000 are Munched at Christmas

A fourth-generation bakery is expected to sell a whopping 16,000 mince pies this festive season.

Stacey’s, which has branches in Bath Street and South Street, in Ilkeston, and in Eastwood and Heanor, makes between 2,000 and 8,000 a week of the sweet treats in the run-up to Christmas.

The family-run business, headed by David Stacey, says the pies are as popular as ever, with young and old alike.

He said: “Younger customers still seem to like mince pies, our kids are all big fans.

However, the gingerbread Christmas shapes are always very popular with younger customers too.

“I can’t remember a time when we didn’t make mince pies – they’ve always been a good seller through the different Stacey generations.”

David added: “We have big orders of mince pies every year, for example Hunter’s Furniture in Derby have 600 pies for their pre-Christmas in-store event, and a church always orders them for their carol service too.”

Stacey’s make a standard mince pie all year round, with their traditional sweet pastry, and a ‘Best’ mince pie at Christmas.

Shop assistant Linda Males, who has worked at Stacey’s for eight years and is based at the Bath Street branch, said: “The supermarket mince pies are not a patch on ours.

“They are a lot nicer. I don’t quite know what it is, but we sell tonnes of them – boxfuls.

“The pastry is different between our ‘Best’ and standard mince pies. The Best ones have a butter crust with suet on top. The original ones are quite popular all year round.”

Last month, the bakery trialled selling hedgehog and llama gingerbread biscuits, alongside their gingerbread men and ducks, and they flew off the shelves within three days.

Last year, Stacey’s held hot cross bun taster sessions at their South Street branch so people could compare the difference between theirs – of which they sold 200 a day – and those mass-produced for supermarkets.

Stacey’s produce something special for every season. Head to one of their shops to test their mince pies for yourself!