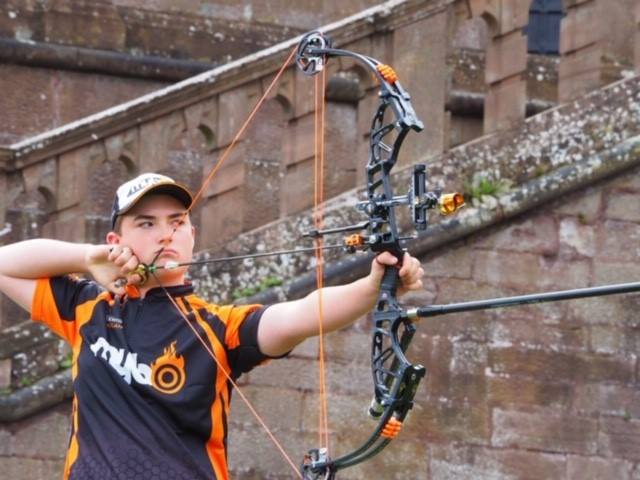 A student at Ormiston Ilkeston Enterprise Academy is hoping to be selected to take part in the Wold Archery Youth Championships in Madrid in 2019.

Lewis Haslam has already won medals and competed across the UK and abroad and hopes to fly out to Spain in August 2019 to compete at the event. He is also ranked number one in GB in the Under-18’s category.

Lewis, 15, said: “When I was 11 my dad wanted to take up archery so I went with him and we joined Anchor Bowmen Archery Club in Spondon. I would go three or four times a week with my dad and my sister.

“I worked with a county coach and then an East Midlands coach and I used to shoot a recurve bow but now I shoot a different bow style called compound.

“I was selected for the national squad last year and this year in May I competed in the European Youth Cup in Italy where we won silver as a team.

“I also took part in the European Youth Championships in Greece in the summer and as a team we won a gold medal.

“Ultimately if the bow I shoot, the compound bow, makes it to the Olympics then I would like to compete in the Olympics, at the moment it’s only the recurve bow that’s shot.

“At the moment I’m training three or four times a week. I really enjoy archery and as I’ve gone along I’ve just got better at it. My dad has even sold his stuff to buy equipment for me.”

Nia Salt, OIEA Principal, congratulated Lewis on his achievements so far and wished him luck in being selected for the World Archery Youth Championships.

She said: “Lewis has clearly worked hard to reach this level and he should be extremely proud of his achievements so far. We are all keeping our fingers crossed for him and hope that he is selected for the World Archery Youth Championships and we will be watching his future progress with interest.”