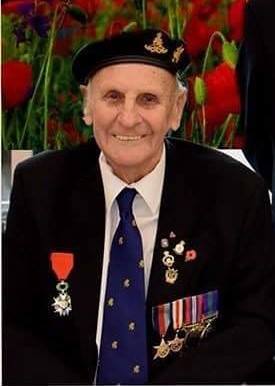 An Ilkeston war veteran who was awarded France’s highest decoration for his bravery during the D-Day landings is to have his medals displayed at Erewash Museum.

Sgt Ernest Turner, who passed away earlier this year at the age of 92, was awarded the rank of Chevalier de la Ordre National de la Region d’Honneur (Legion of Honour) in 2016 during a presentation in the Mayor’s Parlour at Ilkeston Town Hall.

His daughter, Lesley Bamford, has now kindly loaned his medals for a long-term display in the museum’s War Gallery and will present them on Friday 7 December at 1pm, when she will be joined by members of the local Royal British Legion branches.

Ernest was a long-time friend to the museum, loaning objects about his heroic career and family history, and was also a long-standing member and supporter of the Royal British Legion charity,

Mr Turner’s war service included taking part in the Normandy D-Day landings, which saw him run up Juno Beach where 2,000 men had been killed by German guns just 24 hours earlier. He fought in many Second World War battles through France and was stationed all over the world, later serving in Palestine in 1947-48.

“This is a wonderful way to honour the memory of a truly remarkable gentleman. Ernest was always very humble and it is with great pride that we can display his medals, all of which tell a story of incredible bravery. It is much more than a salute to his memory, these medals are part of history and it will be particularly special for our many young visitors to see them. We would like to thank his family for kindly loaning his medals to Erewash Museum.”