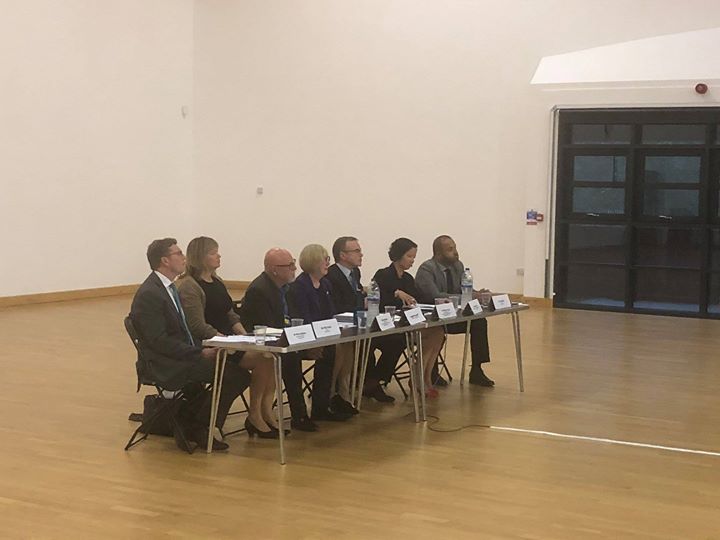 Local MP Maggie Throup has thanked members of the public as well as NHS representatives from across Derbyshire, for their participation in a meeting to discuss the future of Erewash’s health economy and has condemned the actions of Labour Party members who used “bullyboy tactics” in an attempt to hijack the event.

The meeting, held at Kirk Hallam Community Academy, was called by Maggie to give local residents the opportunity to hold NHS decisionmakers to account following news that Derbyshire CCGs face a budget shortfall in excess of £90 million over this financial year.

During the evening, panel members took questions from the audience in order to help clarify exactly what savings and changes are being considered and detailed what potential impact these decisions may have on local health services in Erewash.

Speaking after the meeting, Maggie said:

“The reason for me calling tonight’s meeting was to give our local residents the opportunity to hold key NHS decisionmakers to account over the proposed changes to services in Derbyshire.

“Whilst it is extremely disappointing that the combined four CCGs, especially the one to the north of the County, have run up a substantial deficit, it is clear from what we heard at the meeting that savings can be found within our NHS locally, which will deliver both a better service for patients and value for money to the taxpayer.

“I was also extremely pleased that some of the dangerous rumours, particularly regarding bed closures at Ilkeston Community Hospital where ruled out by NHS bosses including Dr Chris Clayton, CEO of Derbyshire CCGs and William Jones, COO of Derbyshire Community Health Services NHS Foundation Trust.

“Sadly, what we have also witnessed this evening is the darker side of politics.
“The Labour Party, through their trojan horse campaign group, repeatedly tried to disrupt the meeting and intimidate members of the public who had attended to put their legitimate questions to members of the panel.

“What Erewash needs is responsible leadership from their elected representatives, especially when discussing such an important issue like the future of our NHS service. I will continue to provide that leadership as Erewash’s Member of Parliament and call on Labour members locally to put an immediate end to their politics of fear for the good of our community.”