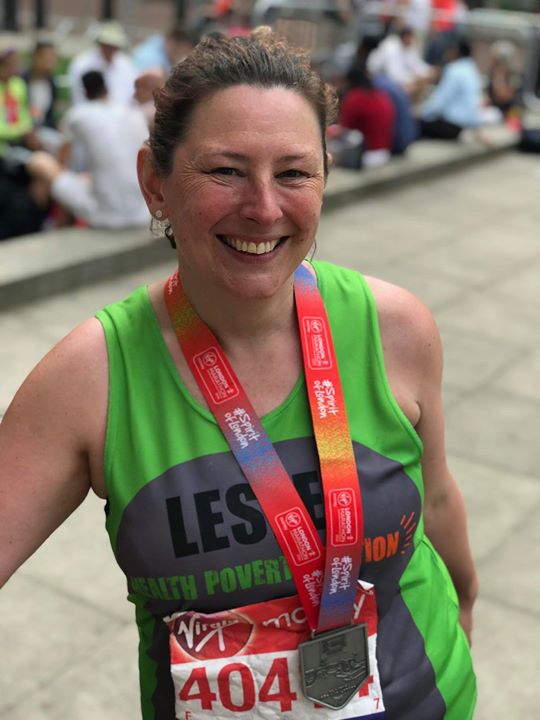 A teacher at Ormiston Ilkeston Enterprise Academy completed the London Marathon and raised £2,600 for charity with the support of staff and students.
Lesley Lowe finished the race in just under six hours and the money raised will go to the charity Health, Poverty, Action.
Students and staff had supported Mrs Lowe’s fundraising efforts by taking part in a non-uniform day, coffee morning and a sponsored fitness challenge.
They travelled as they could in 10 minutes on cross-trainers, bikes and treadmills as part of a staff versus student challenge in the academy’s fitness suite.
Mrs Lowe said she was thrilled to surpass her £2,000 target and wanted to thank everyone who supported her. So far, she has raised £2,600.
She said: “It was amazing. The crowds were phenomenal. My name was on my top and as I ran past people were shouting my name which was lovely. It was so noisy at Tower Bridge. I struggled at about 18 to 20 miles and I walked for a bit. I managed to see my family at eight, 18 and 22 miles which gave me a real boost. I also saw three other people running for the same charity as me and I saw the people from the charity at about 22 miles.
“It was hot but there were lots of showers and water stations along the way and the fire service were out spraying people with water. That was great because it was like going through a rain storm.
“It was difficult seeing people who were struggling. Obviously we had all been training in cold weather so the heat on the day was a bit of a shock.
“When I came around the corner at the 26-mile point and it said 385 yards to the end I just burst into tears.
“The whole event exceeded my expectations and I was pleased with my time considering the weather. The next day I was hobbling around in school, my legs felt like they were broken. I was so pleased to reach my fundraising target. I don’t think I would do any other marathon but I would do the London Marathon again.”
Nia Salt, Principal at OIEA congratulated Mrs Lowe on her achievement.

She said: “Mrs Lowe is an inspiration to us all. She shows us that working hard and sacrificing is sometimes what you have to do to achieve your goals. We are all so proud of her”.

Health, Poverty, Action works in partnership with poor and marginalised communities in 12 countries across Africa, Asia and Latin America to help them improve their health, prioritising communities that do not receive support.