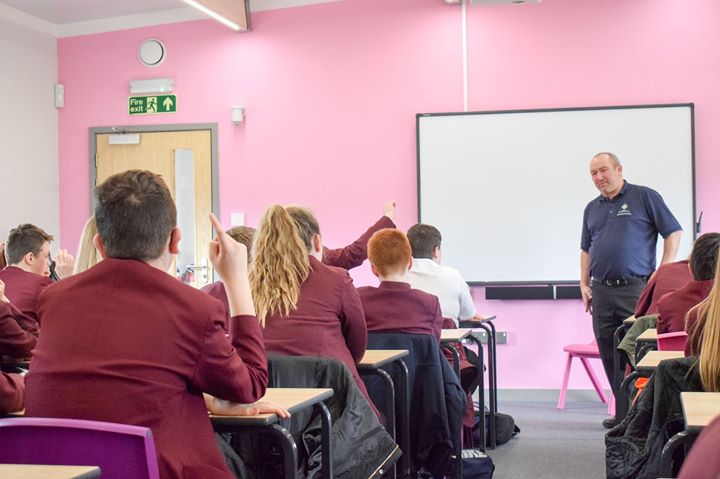 Serving prisoners visited Saint John Houghton Catholic Voluntary Academy to talk to students about life behind bars.
Three inmates serving crimes ranging from fraud to death by dangerous driving warned students about the consequences of committing crime.
More than 180 students from Years 9 and 10 attended the sessions in school run by the charity Prison Me! No Way!
The aim is to raise awareness among young people about the causes, consequences, penalties and impact of crime.
Prison officer Graham Holgate led the sessions and introduced students to three female prisoners.
He told students: “I have worked in prisons for coming up to 32 years and I’ve locked up men, women, young and old. I have no choice about who I lock up. Some of them are coming to prison for 20 or 30 years and a lot of them have mental health issues. Some are very poorly and don’t understand what’s going on.”
The three prisoners who accompanied Graham were serving sentences of up to three years and four months.
One of the female prisoners talked about how she had been convicted of death by dangerous driving following a crash in which a man died.
She said: “I was travelling at 45mph, which was within the 50mph speed limit. There were four lanes of traffic and I was in the slow lane and the traffic was moving. I put my mobile phone on to charge and I was distracted for five seconds. I didn’t see the car that was stationary in the lane I was travelling in and hit the back of it.”
Graham talked to students about the dangers of being linked to crime through friends’ actions and how crime can affect people connected to you.
He said: “Crime doesn’t affect just the person involved, it affects everyone around them. Probably the person who gets locked up gets the easiest time, it’s the people outside who have to keep everything going.”
Student William Holt, 14, said he found the session extremely valuable.
He said: “I don’t think I really thought about how many people can be affected by a crime rather than just the person who is involved in it. It can affect your family and friends as well. I think hearing the talk also makes you think about who you are hanging around with and hopefully what we’ve heard today will help people from going down the wrong path.”