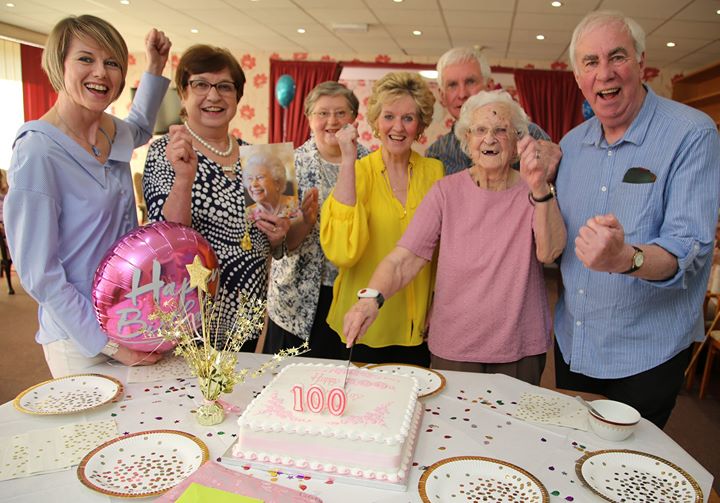 Pat Hollingworth celebrated her 100th birthday on Thursday 19 April surrounded by family and fellow residents at her home in Ilkeston.

Staff at Aston Court, a sheltered housing scheme run by emh homes, and her two sons, Clive and Glenn, organised the special get together which included a buffet, gifts and a huge birthday cake.

A special part of Pat’s birthday was to receive a card from the Queen. She also received a card from Esther McVey MP, the Secretary of State for Work and Pensions, to acknowledge the significant milestone.

Born and raised in a Derbyshire mining community, Pat lost her first husband in a mining accident when her boys were very young. During the Second World War she worked in a munitions factory, making artillery shells for the war effort. She remarried five years later, and had a long and happy marriage until her second husband died twenty years ago. She moved into Aston Court soon afterwards, and immediately found herself with a new group of friends.

Pat puts her longevity down to clean living and the occasional gin and lime. In her youth she would regularly go on long bike rides with her sister, often as far afield as Skegness, where the two girls once slept overnight in a haystack before returning home the following day.

“She feels at home here,” said Pam Milner, Scheme Coordinator. “Last year her family thought it might be better for Pat to move into a registered care home, but she was unable to settle there and greatly missed her independence. Luckily her old flat was still available, so we were able to arrange for her to move back in. She is a good neighbour and friend to everyone at Aston Court, and always takes part in our activities. It was a pleasure to welcome her back. She is such a lovely lady.”

PHOTO: Pat cuts her birthday cake surrounded by her family