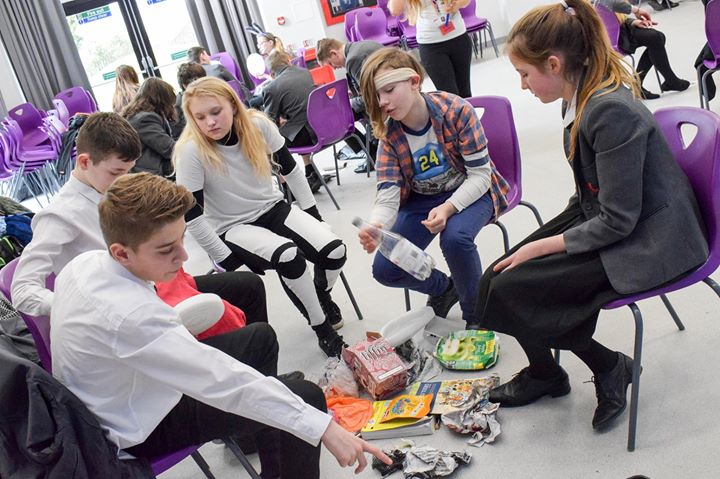 Students at Ormiston Ilkeston Enterprise Academy were urged to consider how their actions impacted on the environment during a theatre company workshop.
The whole of Year 8 took part in a programme called Waste Watchers, which is led by theatre company We Are Gibber and funded by Derbyshire County Council.
The session started off with all students watching a play which follows the story of three Year 8 students all with differing knowledge, attitude and opinions about environmental issues.
Students then took part in a workshop during which they learnt the importance of the 3Rs and considered what actions they could take to reduce, reuse and recycle their waste to help protect the environment for themselves and future generations.
They were also asked to guess how long it takes for different objects to decompose such as a mobile phone and a plastic bottle.
Students were also given a bag of clean rubbish to sort through and decide which objects they could reuse and which would need to be sent to landfill.
Judith Robertson, Head of Year 8 at OIEA, said students thoroughly enjoyed their session with We Are Gibber.
She said: “The students had a fantastic morning and so did and although I thought I was pretty good at recycling, it turns out that I’m not as efficient as I thought I was. We learnt so much. Hopefully now I’ll be better.”

Student Leah Thomas, 12, said she thought it was important that everyone learnt who to reduce, reuse and recycle.

She said: “We had a talk about how we can reduce, reuse and recycle more. We also learnt how long certain items took to decompose and I think the longest was a mobile phone which an take up to 1,000 years. It’s important that we think about how we can cut the amount of waste we produce so that it can really benefit the environment.”

Eilish Stout-Cairns, from We Are Gibber, said students were surprised by how long it took certain objects to decompose.

She said: “They were shocked when we told them it took 450 years for a plastic bottle to decompose and 1,000 years for a mobile phone. We had a great response from the students and they really took on board the idea of reducing, reusing and recycling.”