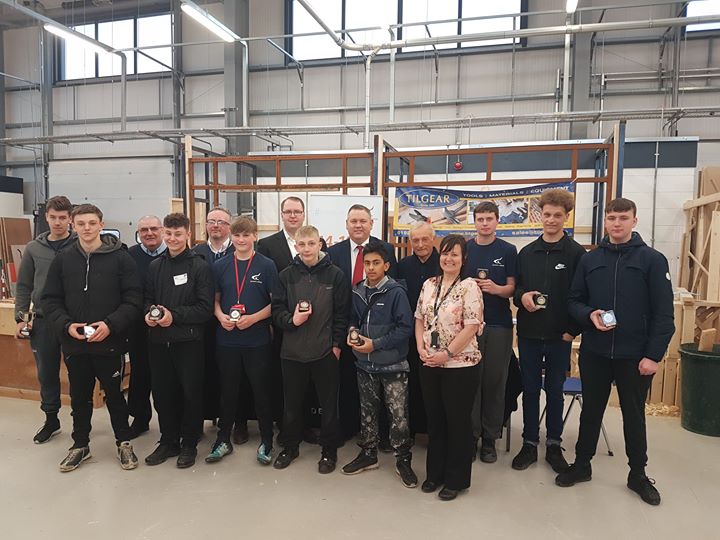 The competition was organised by Derby College’s pre-16 team who coordinate vocational programmes for school pupils at the College as part of an extended curriculum offer and the Construction academy.

They were supported by College staff and full-time students – many of whom had competed in the challenge as school pupils in previous years – and were judged by representatives from businesses involved in the different trades.

The prizes were donated and presented by Daniel Tilbrook from Tilgear which supply equipment tools and materials to schools and colleges.

The Painting and Decorating competition was judged by Bob Godfrey and Richard Beaufort-Eaton from the Bell Group. George Arnold from Murray Park came first with Charlie Shelton from John Flamsteed second and Justin Sims from Murray Park third.

Derby College Construction Team Manager Tracey Hutchinson said: “The competition is designed to showcase the school pupils’ skills and to highlight employment opportunities, apprenticeships and full time study programme opportunities that are open to them after leaving school.”

Dave Kehoe from British Gypsum is a judge in the prestigious World Skills competition programme for College students and apprentices across the UK.

He added: “This is the first time I have heard of a skills challenge of this kind for school pupils and shows just how progressive Derby College is.

“Competitions such as these are an excellent way of honing technical skills and I have been very impressed with the high standards of work completed.”

Pictures show: The winners and judges at the Skillbuild competition for schools at Derby College.