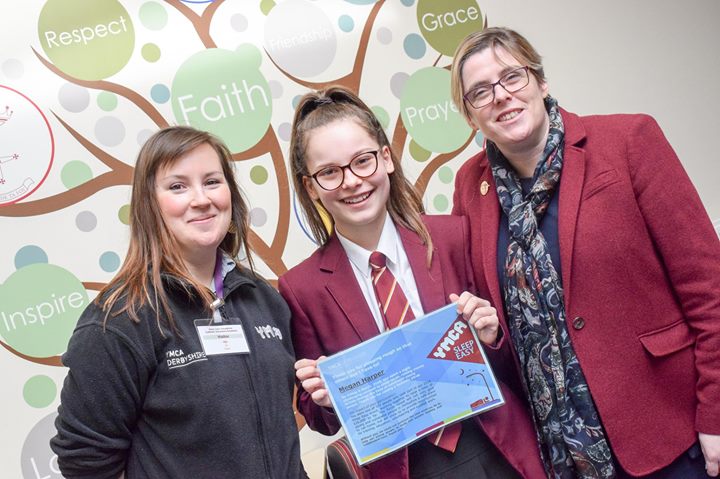 A student at Saint John Houghton CVA has raised more than £600 for homeless people by sleeping outside all night.
Megan Harper, 13, and her dad took part in YMCA Derbyshire’s Sleep Easy, sleeping overnight outside at Derbyshire County Cricket Club with fellow fundraisers.
So far, a total of £27,000 has been raised although money is still coming in. All of the funds will go towards the YMCA’s Safe Front Door campaign, which provides accommodation related support to hundreds of vulnerable people.
Sarah Crane, fundraising and communications manager at YMCA Derbyshire, attended a special Act of Worship at Saint John Houghton CVA to present Megan with a certificate for taking part in the Sleep Easy.
She said: “Over 100 people slept outside at Derbyshire County Cricket Club in cardboard boxes. It was very chilly and there was a lot of rain. This event raises funds for what we do at YMCA Derbyshire to support vulnerable people.”
Megan said she was thrilled with the amount she had raised.
She said: “My original target was £200 and I really didn’t expect to raise as much as I have. Sleeping out all night was hard and I got soaked. It was really cold but I was just thinking about the people who have to do that every night.”
Joan McCarthy, headteacher at Saint John Houghton CVA, in Kirk Hallam, congratulated Megan on her incredible effort.
She said: “We are extremely proud of Megan who has raised a fantastic amount of money for YMCA Derbyshire. Sleeping outside on such a freezing wet night can’t have been easy but Megan did it. She did it to raise money to support vulnerable people and raise awareness of what it’s like to be homeless. We always encourage our students to think of others and Megan is a great example of just one of our students who is making a difference.”