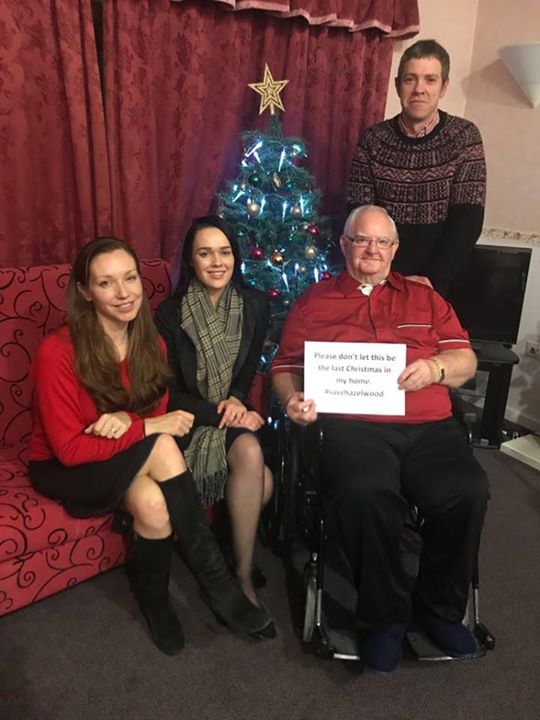 Residents of the Ilkeston council run care home under threat of closure from the Conservative County Council were visited by campaigners fighting to keep it open, today Wednesday 20 December.

Families of the residents, and Catherine Atkinson Labour Parliamentary candidate for Erewash, also used the visit to call on Council leaders to look again at the cost of keeping Hazelwood open, in the light of evidence they may have grossly over-estimated repair bills.

The campaigners have uncovered evidence of a potential conflict of interest between the Council and the company which provided the estimate for works. The campaigners have said that when they contacted the firm previously to ask for a quote for the work on Hazelwood they were told it may be not possible as there could be a conflict of interest due to the firm having carried out work for the Council.

Jason Motley said: “I have no confidence in the Council’s costings because the Company itself told us there could be a conflict of interest. I do not see how these costings can be independent. In my view they have added a lot of unnecessary work to the quote, like repairs to the windows and steps, in order to inflate the cost to justify the closure. The Council has a lot of questions to answer.”

Catherine Atkinson, Labour Parliamentary Candidate said: “The fact remains that the Conservatives made a manifesto commitment not to close a care home without building a new one. They will stop at nothing to try to justify breaking their election promise. They are even prepared to say things no one believes, like that they need to spend tens of thousands of pounds on stairs and ramps for a one story building. The Council must now get a new quote which just covers only the necessary work and from a contractor the families can trust to be completely independent. It’s time for the Council to stop playing the pantomime villain and bring an end to this stitch up. Rather than just going through the motions the local Conservative MP must put her constituents ahead of her party and stand up against her Conservative colleagues on the Council.”

-What other work, if any, has the company that provided the costings done for DCC?

-Does this constitute a conflict of interest?

-Why will the Council not allow the families to have the information and to seek their own quotes, for the NECESSARY work on the roof of Hazelwood.

-Why did this company quote for non-essential work?

-Why does the Council not seek at least two quotes?