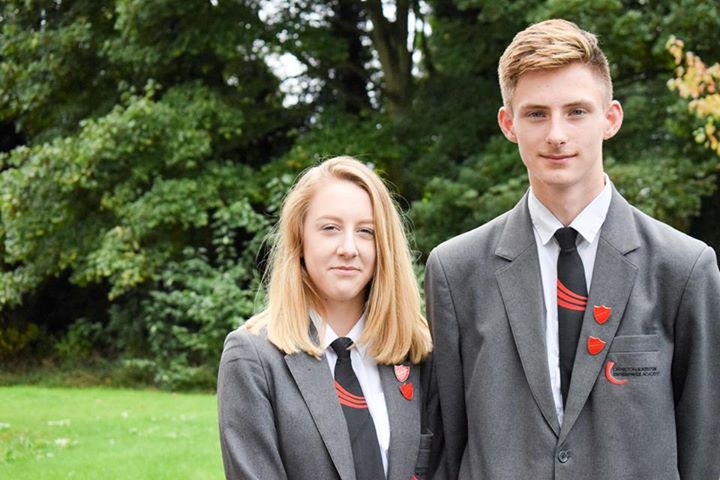 A Head Boy and Head Girl have been appointed for the first time at Ormiston Ilkeston Enterprise Academy.
Students were given a description of what the roles entailed and invited to apply, those selected were then interviewed before a decision was made.
Lottie Hardy and Will White, both 15, were awarded the coveted positions which will see them take on more responsibilities and become role models for the academy.
They have already been asked to speak at the Year 6 open evening, helped out on transition and induction days and they will meet regularly with senior staff to discuss their ideas about improvements and new initiatives they would like to see being introduced.
Will said he was already enjoying his new role. “I just wanted to give something back and I want to make sure that the younger children who are coming through have the same chances that we did.
“I would like to raise awareness of mental health issues among boys. I think it’s important for everyone to realise that it’s ok to come forward and talk about things like this.
“I also want students to realise that they can do whatever they want to do in life, I think there are some students who might feel that they are not going to go far in life so it’s about raising their aspirations.
“Speaking at the Year 6 open evening was a bit nerve-wracking but I think it will get easier the more we do things like that. Our teachers have given us lots of support; it’s all about gaining confidence.”
Lottie said she was proud to be Head Girl.
She said: “We were given a job description and we had to write something that was a bit like a manifesto and say what we would do if we were given the role and then there was an interview. I was really pleased to be given the role.
“We’ve already introduced the idea of having two prefects who interact specifically with the Year 7 students. I think it’s important to break down the barriers so that the younger students don’t feel afraid of approaching the older students.”
Nia Salt, Principal of OIEA, said: “We are so proud of Lottie and Will who have already been showing us what great ambassadors they are for our wonderful school. I am sure they will prove to be fine role models for our younger students and I look forward to working closely with them during the rest of the academic year.”