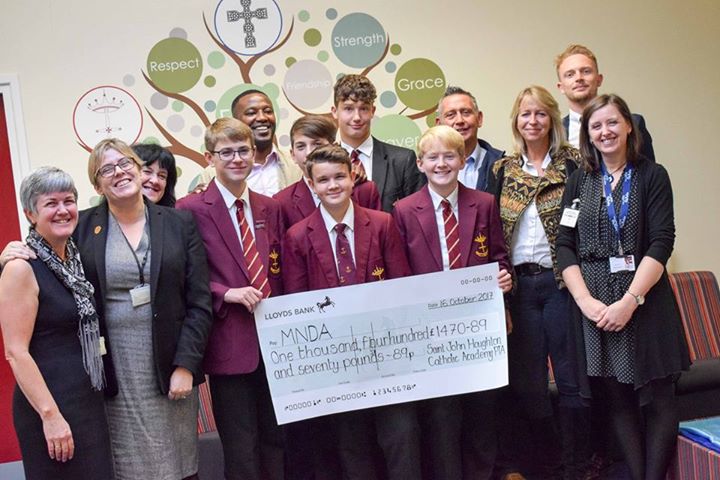 A fun run organised by Saint John Houghton Catholic Voluntary Academy in memory of a staff member who died raised more than £1,400 for charity.

The school organised 3k and 5k runs for all ages and raised a total of £1,470.89 for the Motor Neurone Disease Association after Mick Hackett, who worked in the academy’s IT department, died as a result of the condition last year.

Entrants were asked to raise sponsorship for the charity after paying an entry fee to help cover the costs of organising the fun run.

A silent auction also took place which included a Brian Clough Way road sign, which was donated by Ashley Carter, director of the ‘Shaun Barker: One More Time‘ documentary.

Karen Morley, finance assistant at Saint John Houghton CVA who organised the fun run, said she was thrilled with the amount raised.

She said: “We are very grateful to the sponsors, helpers and participants who made this event possible. A huge amount of work went into the fun run project for the second year running and it has been a great success. It’s very humbling to see so many people work together to achieve the amount raised. We know that Mick Hackett would be extremely proud that he has been remembered in this way. My special thanks go to his wife Julie who joined us at the presentation to the MNDA.”

Sharon King, East Midlands fundraiser for MNDA, thanked everyone at Saint John Houghton CVA, in Kirk Hallam, for their efforts.

She said: “This donation is so important to us and it will go towards helping local people affected by Motor Neurone Disease. It will help to fund equipment and grants to buy the equipment that people need and it will help them to live normal a life as they possibly can. It’s been wonderful working with the school and Karen.”

Joan McCarthy, head teacher at Saint John Houghton CVA, said she was delighted with the donation.

She said: “It was fantastic to see our wonderful school community come together for the fun run which was held in memory of a much-loved member of staff, Mick Hackett. We are really pleased with the amount raised and hopefully this will help support the great work done by the Motor Neurone Disease Association.”