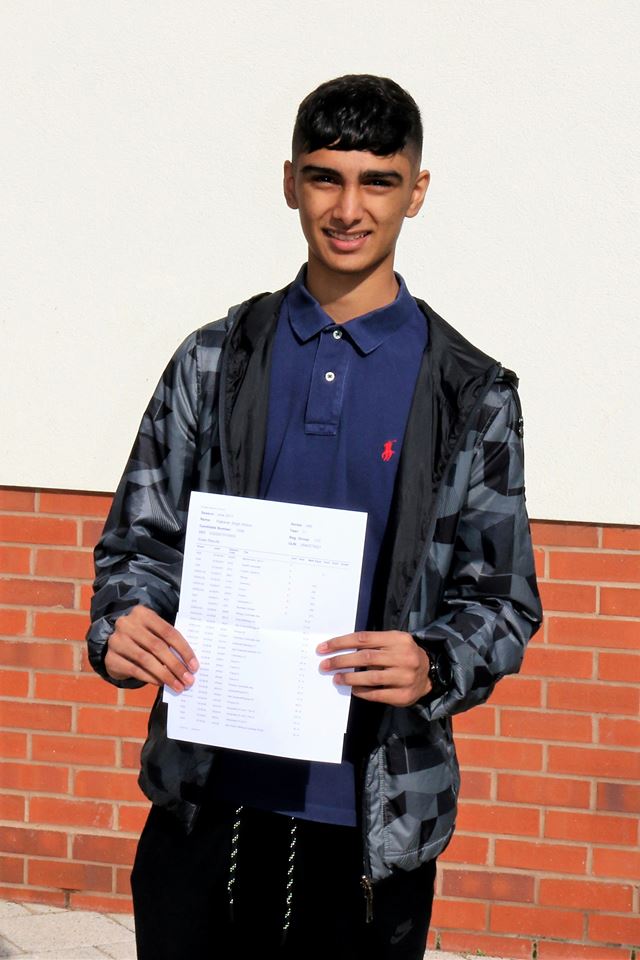 Students at Ormiston Ilkeston Enterprise Academy celebrated picking up their GCSE results today.
Overall, 44% of students achieved a Grade 4 or better in English and maths, with a 4 the new grade set by the Government as a pass, and broadly equivalent to the old Grade C.
In English, 58% of students achieved a Grade 4 or better – five percentage points up from last year. The results are especially impressive as this is the first year of new tougher exams in English and Maths.
Among pupils collecting their results today was Raj Dhillon.
Raj 16, of Ilkeston achieved a 9 in Maths, three A* grades, three A grades, a 6 in English Literature and 5 in English Language.
He said: “I wanted to push myself and knew I could do well. Maths is my favourite subject so it’s very special to get a 9 in that. The last few days have been awful and I’ve been really nervous but it’s good to finally open my results. I’m now looking forward to doing A Levels in Maths and the sciences.”
Callum Eyre, 16, of Cotmanhay achieved a 9 in English Language, 8s in Maths and English Literature, an A*, three A grades and a B.
He said: “I was so nervous but once I opened up my results I was ecstatic. I’ve never felt so good about anything before. I wasn’t sure what to expect. I revised but always thought I could have revised more than I did.
“School have really looked after us and it’s been amazing. I’ve really missed it since I’ve left but I’m now looking to do my A Levels and after that I’d like to start my own business one day.”
Nia Salt, Principal at Ormiston Ilkeston Enterprise Academy, said: “This is the first year of the new GCSEs, and English and maths are tougher than previously, with new grades introduced as well – but our students and staff have responded brilliantly, as shown by today’s results. They are a testament to their hard work, talent and dedication, and our students have fully deserved their outstanding grades.
“As a school we have always focused on the achievement of every student, including those taking the academic subjects, and these results bear out our commitment.”
There was also a good improvement in the proportion of students both entering and achieving the EBacc, the set of academic subjects that universities and employers are most impressed by. The proportion achieving the EBacc rose two percentage points from 2016, even though the pass grades for the EBacc have been increased for English and maths, with a new Grade 5 required achieving this measure.