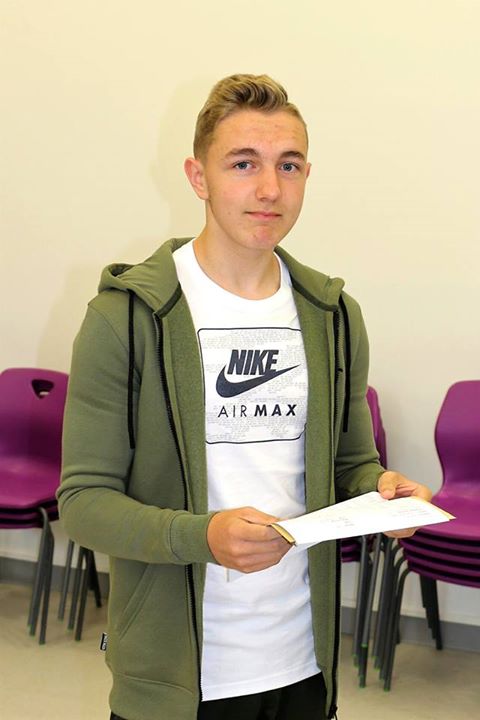 A teenager who was involved in a high-speed hit and run collision weeks before his exams was celebrating his GCSE results at Ormiston Ilkeston Enterprise Academy today.
Just two weeks before his first exam, AJ Allen, 16, was walking across the pedestrianised Market Place in Ilkeston when he was struck by a car driving at 40mph.
AJ flew up, hitting the windscreen and when the car came to a halt he was catapulted onto the bonnet of another vehicle.
The driver left the scene, leaving AJ’s school friends to call an ambulance and his mum, Lindsey, who travelled in the back of the ambulance with him, fearing the worst.
He was rushed to the Queen’s Medical Centre in Nottingham where he underwent a full body and brain scan but unbelievably was able to be discharged the next day after suffering head to toe cuts and bruises.
AJ also suffered trauma and memory loss as a result of the collision, which happened on April 29th, but despite this he was back at school within days to take part in revision sessions for his GCSEs and today he achieved the results he needed to get into Bilborough College in Nottingham.
AJ achieved a Grade 6 in Maths, and four Bs in Biology, Chemistry, Physics and Finance, amongst many other grades.
Doctors think among the reasons AJ avoided major injury was the fact he was fit and active after a two-year drive to get in shape saw him lose more than four stone at the gym.
He now plans to take his love of fitness to the next level and study sport, business and psychology with a view to becoming a personal trainer and fitness instructor.
He said: “I knew I needed certain passes to get into college so I was focused on that, I was just relieved when I opened my results.
“I really enjoy training at the gym and want to get into personal training so this allows me to take that next step towards that.”
Mum, Lindsey Allen, 36, said: “AJ’s friends rang me and I rushed to the scene of the accident. I really feared for the worst in back of that ambulance. He couldn’t see as he was temporarily blind and he asked if he was still alive.
“The ambulance crew was saying he shouldn’t be here after being hit at that speed. He was covered with blood and had to undergo a brain scan and full body scan but amazingly nothing was broken or damaged apart from cuts and bruises all over him.
“Fortunately he looks after himself and has worked really hard to get fit losing quite a lot of weight – he’s a different boy now and that probably helped him.
“I couldn’t believe it when he was discharged and was then sitting his exams. He suffered memory loss as a result of the accident and even now can’t remember anything about what happened. The doctors were great and I have to say the school was fantastic in how they supported him – going over and above.
“Today was very a very emotional day for us all and we’re all so pleased that he got the results he wanted so he can go to college and follow is dream of being a personal trainer.”
Nia Salt, Principal of Ormiston Ilkeston Enterprise Academy, said: “AJ really embodies that spirt of belief and resilience. He could quite easily have said he was too poorly to take his exams but he didn’t. His friends and family rallied around him and gave him great encouragement and support so he could face his exams with confidence.
“We were all really surprised at how brave he was as it was a really stressful and traumatic time for him. We gave him extra support during his exams due to the medical circumstances such as a personalised timetable and extra time.
“It was very emotional when he came in to collect his results. He was so relieved and we were so proud of him and we had a little moment and shed a few tears. He worked really hard and it meant a lot to him to be able to get his results and move on to the next chapter in his life.”