Alan Hardy clinches the deal to rescue football at the New Manor Ground. 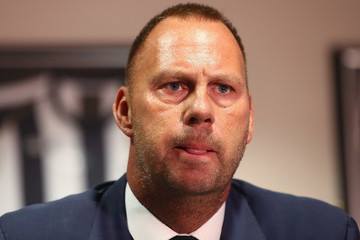 Notts County FC owner Alan Hardy is now also the owner of Ilkeston Town FC.
He has purchased the club from Ilkeston FC liquidators Smith Cooper for an undisclosed fee.
Hardy said: “I am absolutely thrilled to have completed my purchase of Ilkeston FC and can confirm that the club’s name will revert to Ilkeston Town Football Club with immediate effect.
“It is with great excitement that I also announce Steve Chettle as the club’s new manager following his departure from National League North side Nuneaton Town, where he was assistant manager.
“Steve is an Ilkeston and Nottingham Forest legend who I’m sure will prove to be an exciting appointment for supporters.
“He will be assisted by Ian Deakin, who brings plenty of experience and local knowledge after managing Kimberley last season.”
This news comes as a great relief to followers of Ilkeston football at the New Manor Ground following a long period of uncertainty.
Last season Ilkeston FC (nicknamed the Robins) struggled to complete the season amid mounting debts and an exodus of senior players. They finished next to bottom in the Evo-Stick Premier Division and were relegated, but then Evo-Stick threw them out of their structure altogether.
Following liquidation, the club now finds itself dumped in the Midland Football League Division One and begins the 2017-18 season with an away match on 5th August against Uttoxeter Town.
With the new season so close, Alan Hardy and a link with Notts County was the only realistic option if football was to take place this coming season. Most if not all of last season’s players (all owed wages) joined other clubs, along with some officials.
Many fans will be delighted with the appointment of Steve Chettle as manager – he was a well-respected member of the coaching and managerial team in the ‘good old days’.
Ilkeston FC Supporters Group were making plans to form a community club if no suitable buyer could be found, but the situation has now been resolved with Alan Hardy taking over.
Hardy (photographed) went on to say: “I am absolutely committed to making Ilkeston Town not only self-sustainable, but also competitive and ambitious in aiming to claim a place in the second tier of non-league football in the medium term.
“Until this particular opportunity arose it was never my intention to acquire another football club. There are very few, if any, other clubs I would rescue. As I touched on earlier, Ilkeston are a special case for me personally and, as was the case with Notts County, it would have genuinely hurt me to see them die.
“I vividly remember my seven-year-old self standing behind the goal, bang in the centre, lapping up every minute of derbies between Ilkeston Town and Eastwood, as well as other local matches involving the likes of Long Eaton, Heanor Town, Belper, Kimberley and Arnold. They were all blood-stirring encounters and all those memories have enabled me to carry great enthusiasm into my career in football.
“I am now looking forward to working with the people of Ilkeston to develop a club they, and their town, deserve.”