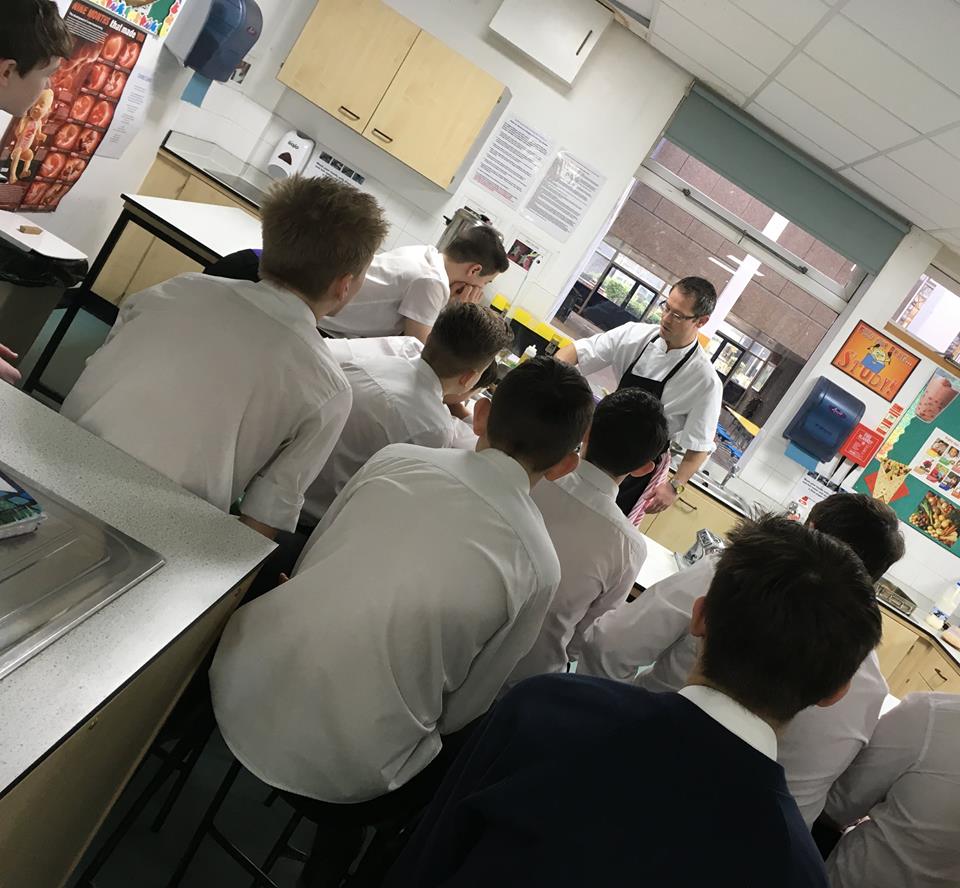 Daniel Brazil talked to students about his job catering for thousands of people at Leicester, from football club directors and players to supporters.

He also talked about his career path, the staffing structure in a professional kitchen, the importance of healthy eating and the food that the players eat before and after a match.

Mr Brazil, who was formerly head chef at Chatsworth House before starting his role at LCFC last October, said: “We make the food for the footballers pre and post match. They are elite athletes so they have food plans. They will be eating plain grilled chicken, broccoli, brown rice and plain cereals.

“Some of them have very specific diets in terms of the foods they can and can’t eat. Some might be on a high protein diet, so lots of chicken and fish, while for others their diet might be high in carbohydrates which means a lot of sweet potatoes.”

Mr Brazil showed students how to cook pan-fried pheasant, leeks and raviolis and apple tarte tatin and they were given the opportunity to taste the food. He also answered students’ questions.

He said: “At any home match we will feed everyone from the general public right up to the football club directors and all those in between. There are five kitchens that look after all of the different areas and there is a team of chefs. I do some cooking still but not as much as some of my chefs. Hopefully I can inspire you to become the next generation of chefs. I really believe in bringing forward the new generation of chefs as I think there is a shortage in the industry. I think it’s really important to invest in education and apprenticeships.

“It’s a job with long hours and pressure but it’s fantastic, good fun and very satisfying.”

Claire Linley, Food Technology teacher at Kirk Hallam Community Academy, said it was a privilege for students to see Mr Brazil in action.

She said: “He showed our students some of the skills involved in high-end catering and they really enjoyed it. This has been an amazing privilege and we would like to thank Daniel for giving up his time to come along and inspire our students. He’s worked at Chatsworth House where he was responsible for all of the restaurants and now at Leicester City FC. We were extremely fortunate to have him here.”