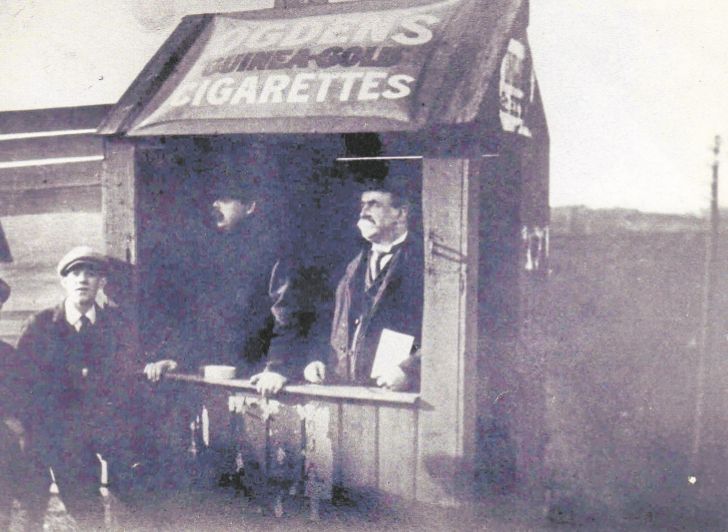 This photo, believed to have been taken locally, has baffled everyone at the Ilkeston and District Local History Society.    I think it dates back at least to the early 1900s, looking at the way the people are dressed.  I’ve never heard of Ogden’s Guinea Gold cigarettes.  Perhaps that might date the picture. What does the sign on the side of the shed say?  Could it be an entrance shed to an event?  Are they entrance tickets on the counter?  Is the man on the right holding a programme?   Could the fencing at the back be a temporary stand? The men are staring at something while the two lads have spotted the photographer.  In those days a photograph like this would take quite a while to take as the people in the picture would have to remain very still for a few minutes and the photographer with his camera fixed to a tripod would be under a cover. In those far off days many shows and events of all types took place as people had to make their own entertainment.  Television and wireless were many years away. Whippet, greyhound and pigeon racing were very popular, especially among the mining community.  Flower, fruit and vegetable competitions took place in pubs and village

halls, along with canary and budgie competitions.  Pigeon lofts were everywhere.  Carnivals, band concerts and even outdoor boxing events were popular.   Charity football and cricket matches took place to raise money for injured workers and their families. Where are the tug o’war competitions these days?  Stanton Blacksmiths won the All England National Championships in 1932. Most of the aforementioned events and competitions tended to be organised and performed by local people working in local industries.  With the decline of the coal mines, textile and hosiery factories, along with Stanton Ironworks, the slow demise of these so called working class pursuits started in the 1960s. The loss of industry doesn’t just mean a loss of jobs, it also changes the culture of society, a culture that probably lasted the best part of a hundred years.  Things weren’t perfect in those days but people did tend to get involved. If anyone had any idea about the picture, please get in touch via the Ilkeston Local History Society or this paper.